Doctor Who: Salt of the Earth - Review 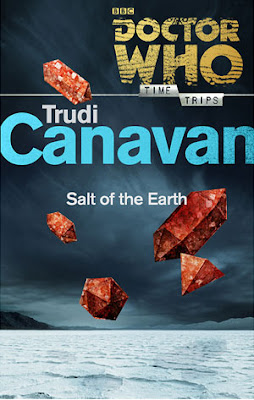 Before reading Salt of the Earth, it is interesting to note that the Third Doctor and Jo Grant weren't the author, Trudi Canavan's first choice at who would star in this E-Book. After pitching her idea to the BBC they came to her saying it might be a little strange to feature the Third Doctor in an Australian setting given that the majority of his adventures had taken place in England. But she did it anyway and for the most part, the book works...

It is also strange to think that Canavan wanted to use the Third Doctor's first companion, Liz Shaw. Not that there is anything wrong with the character, actress, the late Caroline John did a fantastic job in the role and she is up there in my favourite companions list but given the story, I think that Jo Grant worked much better despite the fact that Liz Shaw has always been underused in the book side of the Doctor Who franchise. It is nice to see that the author has managed to capture the bubbly nature of Jo's character perfectly. Her relationship with the Third Doctor has gone down in history as one of the best Doctor/Companion pairings of all time and when it is well reproduced like it is here, I can hear Jon Pertwee and Katy Manning delivering the lines.

The story features the Doctor and Jo pitching down in one of Australia's many salt lakes where they waste no time in making Blokarts, a modern invention which is a sort of bike with a sail that means you don't need to use pedals or fuel. When travelling around on these Blokarts, it doesn't take the pair long to come across the salt statues that used to be people.

Being a series of E-Books, Salt of the Earth, is the shortest of the Time Trips range and because of this, there aren't many supporting characters. There is one woman called Sun Williamson who assists the Doctor and Jo, answering their questions, helping to get them out of trouble and is a general taxi service for the pair. But she doesn't get much time to develop or become particularly interesting. And the other character is Smithy, but he's a dog, a farm dog and that's all you need to know about him. He is a sweet little character who takes a shine to Jo and The Doctor.

A problem with these E-Books is that often, the main characters, in case, The Third Doctor and Jo often get pushed to the side and are written as afterthoughts. Here they are written like the protagonists they always were. But I do understand that it must be hard for writers to give them plenty to do with such limited story telling space.

The villain is unfortunately distorted and clichéd and not interesting. And much like The Power of Three television story, they are disposed of with haste rather than exploring them a bit more.

But, where Salt of the Earth falls is more than made up for from an educational point of view, with the reader learning more and more about salt. Quite why you would want to learn about salt, is beyond me but I found myself learning about it is formed. So, if like me, you weren't too keen on the story, you will learn more than enough about salt!