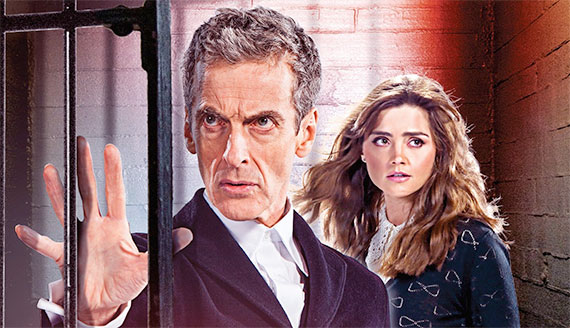 Imprisoned in a high security, inescapable prison built into an asteroid, for heinous crimes, that is where we find the Twelfth Doctor. But in typical Doctor fashion, the word inescapable doesn't register with him and he keeps trying to get out, while he is in no hurry to actually leave the prison, he spends his time exploring the corridors and cells, much to the annoyance of the Governor. To make matters worse, a girl, an associate of the Doctor, keeps turning up, waving placards outside the prison because the security system won't let her in. But nothing is well aboard the prison, constant power outages plague the facility and there is something evil stirring in the bowels of the asteroid, something that threatens to kill everyone on board...

Author James Goss takes The Blood Cell as his first stab at writing a story for the Peter Capaldi Doctor and his companion, Clara, played by Jenna Louise Coleman. And he nails the pair of them! Though they spend much of this story apart, when they finally meet each other, their love/hate relationship and their endless bickering is wonderful to read in printed form. What is wonderful is that the Doctor, or Prisoner 428 as he is known for most of the novel, is evidently Capaldi, with Goss nailing the characterisation. He is brittle, blunt and can be breathtakingly rude! But he is also a little kinder than the one we see on television as we see him as a moral man, trying to do what is right but not one hundred percent sure as to why.

I was initially a little put off because this story is told through the use of first person narrative. The only Who book I have liked which is told through this manner was Bunker Soldiers, which we told the adventure through the eyes of First Doctor companion, Steven. And this tale is told through the eyes of the Governor, a broken, jaded and dejected man whose past glories are miles in the past and who wants to lead a quiet life at his new job. Goss does a good job at making the Governor interesting by making events spiral out of his control as the prison falls into chaos. There is also the strange Blood Cell which houses the monster, which is a nasty blob of human body parts who ultimately wants to know what it means to be human and have a proper life. This section of the book is grisly and dark and Goss wisely keeps the gore down due to the younger people reading it. What is done well is how the blood cell, for the most part, is left up to the imagination, as it is easier for human imagination to create something as completely inhuman as this creature. And there are the robotic custodians on hand who fulfil all the death ray needs.

The Blood Cell is a great novel, pacey, ingenious, readable and gloriously dark. While the first person narrative might put some people off, I would recommend giving it a try. It starts off a little slowly as we are introduced to the world the Doctor is in but once we get past the first death, the pace makes it hard to put the book down. I literally finished this book in two days! But ultimately, what this book is, is an interesting and different way in telling a traditional Doctor Who tale that manages to remain a Doctor Who story through and through!