Once Upon A Time: Season 3 Episode 6: Ariel Review 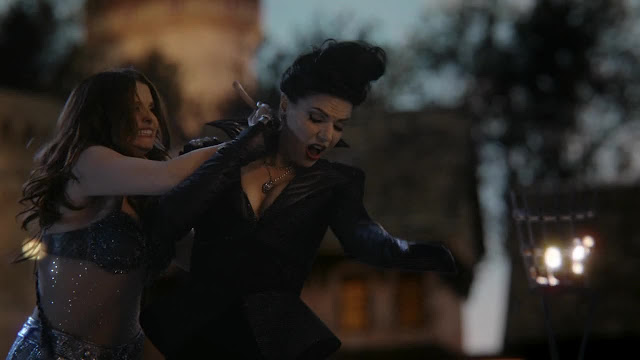 OUAT usually takes familiar fairy tales and turns them on their heads giving them darker twists. But with the little mermaid, they decided to stick close to the traditional text and it really works. It's probably because the movie is special to a lot of people to it made sense for them to leave it alone. Alright, they threw in a few too many nods to the movie including the phrase 'under the seas', which was mentioned more than once, but the homages just make you smile.

Actress Joanna Garcia Swisher is instantly likable and plucky in the role of Ariel. This episode just makes you adore her. ou go from liking her, to hating her, to loving her again in her engaging arc. It was very funny when Ariel stabs Regina in the neck with a fork, you just didn't see it coming. It has to be the best scene of this series so far.

How the writers introduced Regina into Ariel's origins was very clever. Actress Lana Parrilla has really found her character in this season and she is just wonderful when she is playing the villain and she completely owns it. No longer is the evil queen slightly wishy-washy. She's evil. And she knows it! And she was hilarious as Ursula as it looked like Parrilla had a blast playing the sea witch. Her take on the voice was excellent and the costume was great.

The effects done on Ursula were pretty damn good. Ursula's tentacles were well realised. The only problem I have with the series is those digital magical backgrounds because you can see it isn't real. My reason is that because they are story characters, the world isn't supposed to look real but it can be a little distracting sometimes. But even they seemed a little less jarring than they have been. And the fact that we meet the real Ursula at the end of the episode shows we haven't seen the last of her. She certainly seemed evil enough to give Regina a bit of a shock.

But Ariel's story dominated the episode, which was expected and we got some progress made in Neverland witch was desperately needed. There were plenty of character moments while the gang were trying to find Neal including Emma telling Mary Margaret about her kiss with Hook. This might not sound like a major thing but Emma has resisted her mother/daughter bonding so it was a step forward in their dynamic.

Hook's reveal in the truth or die cave was an emotional moment, of course we knew he had a thing for Emma but it wasn't clear it ran so deep. Hopefully Neal being back will had something dynamic to their relationship.

I'm also happy that Regina and Rumple are back together, plotting again. They are both on their top game when they are together. Both characters play differently than the Charming's and it will interesting to see whose method with save Henry faster. You can say whatever about evil characters, they get things done!

Ariel was a great episode. Garcia did such a good job with her and she had a great chemistry with everyone she met. This is easily the best episode of the season so far!