Once Upon A Time: Season 3 Episode 1: The Heart of the Truest Believer Review 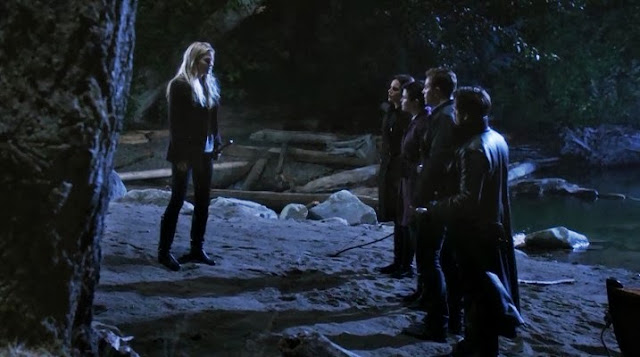 One of the most interesting things about Once Upon A Time is its ability to take fairy tales and myths that we seem to be born knowing and twist them in really interesting ways. That's why, when Red Riding Hood transforms into a werewolf or Belle into a drunk it's so engaging to watch. This episode sees our heroes and villains journey to Neverland, depicted here as a nightmare-ish land, after Henry is kidnapped at the end of the previous season. Let's face it though, the whole Peter Pan story is quite dark, the spirits of motherless boys who never age on a savage island and that shadowy figure grabbing at Bae and Wendy seemed to like something from out of our darkest nightmares!

Unfortunatly, OUAT's third season doesn't get off to the best of starts as the episode is rather bogged down with family dramas. An area it seems that most of Storybrooke has it's problems. Jared Gilmore's, Henry, has two mothers who don't like each other. Emma Swan has had a much bleaker story than either of her parents, Snow White and Prince Charming and that leads to some rather clunky dialogue between the parents and their child. And Rumpelstiltskin just came along because he wants to kill a grandson because of a prophecy about the kid being his downfall. Let's face it, who doesn't want him to kill his grandson? I'm sorry but that boy can't act at all.

As I stated above, this episode begins where the previous series ended with Emma, Snow, Charming, Regina (The Evil Queen) and Rumple all getting on board Captain Hook's pirate ship and follow Henry and his kidnappers, Greg/Owen and Tamara who are working for a mysterious conglomerate whose end goal is to wipe out all magic.

The family issues come to a slightly ridiculous head on Hook's ship when The Jolly Roger is attacked by Mermaids. Now this is where it gets weird. I get that everything is evil in Pan's land, but even mermaids? And how can they threaten to capsize a ten ton-something boat with their fish tails? Anyway, they attack the boat until Regina begins to throw fireballs at them and they all go away except for the one that Snow and Emma have caught for no reason. The dump the mermaid on deck who then gets a conch shell, which, I don't want to know where she got from, until those tails have big pockets and summons a storm. As usual, Regina wants to kill her while Snow wants to set her free. As the mother of all storms rains down on the group, Regina and Snow get into an all out fistfight. (Because Snow now has a little darkness in her heart, it means she can go around slapping people?!) This fight somehow leads into Hook and Charming also having a scrap for no reason. Emma realises that they are the reason the storm is happening and tries to get everyone's attention by jumping into the water which nearly becomes her watery grave for no reason.

Also, why is everyone convinced that Neal is dead? Sure he was shot at the end of the previous season but he fell through a portal. So why is so sure he is dead when Henry isn't? Neal arrives in the Enchanted Forest where he receives some medieval doctoring from Sleeping Beauty, her prince Phillip and Mulan. He then heads off with Mulan to his father, (Rumpelstiltskin)'s castle. There they met looter and squatter Robin Hood and Neal does so fancy moves with one of his father's old walking sticks and a magic door opens. He manages to open another portal to where he hopes will take him to Emma. (You do need an element of belief watching this show!) Emma then discovers she isn't enough of a believer to find Henry in Neverland so Rumple sets off before her.

But onto better things, Rumpelstiltskin is one of the best things about this show as he waltzes onto Neverland trying to save Henry, I assume he doesn't care about the prophecy at this point. There he meets a dying Tamara who he brings back to life only to kill again when she runs out of information. But Rumple is beaten by #Lost Boy 1 who throws a little straw figure at him. Rumple picks up the figure, presumably something that his son Neal had made at some point. But actor Robert Carlyle excels in the role and completely sells the scene.

To my surprise, Henry was alright in this episode. Don't get me wrong, he still can't act but he managed to get the better of Greg/Owen and Tamara and managed to get some witty quips in at the same time. But he is the heart of the title, he is the truest believer that it is talking about. He believes so much he manages to use Pixie dust to fly, only to land right in the clutches of Pan. Judging from the title, that is probably why we got a flashback to Henry's birth, Emma says her superpower is being a mother. She is the mother of Henry who, according to Pan, is the most valuable asset of all. Cue more family issues...