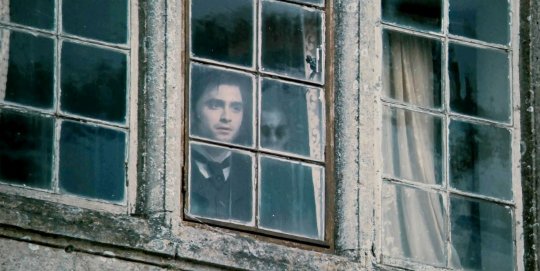 I love The Woman in Black. I always have and probably always will, the book, the play and the film, they are all wonderful, creepy and enjoyable. But for this review, rather than just saying I enjoy it, I'm going to look at the problems with the movie's story and production to give it a fair and unbiased review.

If you think about, Daniel Radcliffe has been facing supernatural entities all his acting life. Here is no different, in his first film role since Harry Potter, he seems to be taking baby steps away from the film franchise that made him world famous. I say baby steps because the supernatural elements are much like those in Harry Potter. But that's fine, maybe that was what Radcliffe needed to do and this is exactly the sort of film role he needed to shake Potter off.

The Woman in Black is a traditional haunted house story told by the revived British horror company, Hammer. In it's sixties/seventies heyday, Hammer was massive, producing and influencing hundreds and thousands of different movies, most were massive success stories, usually helped because they didn't rely on gore, sex and swearing to make things scary. This is certainly evident as the movie relies more on sounds, glimpses and atmosphere to get its story across and on that it is successful. Radcliffe fits perfectly into the role of Arthur Kipps and manages to get across the fact that he is a man in mourning and is troubled by the death of his wife who died during childbirth. But there is something about this move that feels slight.

It is a good job we get Daniel Radcliffe running around the house looking scared otherwise this movie could have felt a lot worse, but the atmosphere is superb and it is a credit to director, James Watkins. However, I feel the story is where the film falters. I was a little disappointed when I first heard they were making it that it wasn't going to be the original author Susan Hill who was writing it. Instead it is an adaptation from Jane Goldman. Goldman changes the story making it so that Arthur's wife has already died and he is sent to the hauntingly named Eel Marsh House as a last ditch attempt to rescue his career, so he can continue to make enough money to look after his son. In the original book, both his wife and son survive to the end when the vengeful Woman in Black kills them in a pony and trap accident much like her own son died. The main bulk of the movie luckily follows much the same path as the book with Arthur arriving in strange town full of suspicious locals who seem to live in terror at the house he has been sent to get sorted. Many of the characters are the same with characters like Samuel Daily, Keckwick and Spider the dog making appearances. But it is the ending that is the biggest change of all and almost ruins the entire film if you think too hard about it. Arthur's young son, sees the Woman in Black when he and his nanny arrive in the town to see Arthur. His son, steps down of the train station platform and onto the tracks. Arthur rushes to save his son from the oncoming train but both of them are struck down and killed by the train which is going a little too fast to stop. The scene is beautifully played with actors Ciaran Hinds and Jessica Raine getting the horror of the event unfolding before them across. But the bit where Arthur, his son Joseph and his wife go into the light, happy and together again, threatens to ruin the whole tone of the movie. I was however pleased that, after that scene, we cut to black and hear the Woman in Black crying before suddenly appearing out of the darkness and screaming, to reaffirm that this is supposed to be a horror film, not some lovie-dovie movie.

If you look at the story and the conflicting tones in the script too much the whole thing falls apart. What this film does wonderfully is get across the old Hammer horror tropes very well. We have a haunted house in the form of Eel Marsh House which is full of Victorian bric-a-brac and the eyeless china dolls and clockwork toys, especially the monkey with the rattles manage to creep me out a little whenever I watch it. There is also a rocking chair that moves by itself an object which the film relies more on the sound it makes, rather than the actual imagery. When the ghosts finally turn up, the actual Woman in Black is terrifying and she makes the film. If she wasn't terrifying, then the film would fall flat. Whether she is standing in the background of a scene or screaming at us when its the end, she will creep you out! And the film itself is frightening. It is just a shame that it relies heavily on old tricks to make you jump like faces appearing behind characters or in windows. It's jump worthy scary but nothing to write home about.

What I love the most about The Woman in Black is that, when look past the issues I have detailed here, it's a cracking ghost story and it is a sort of precursor to the ghost films we have today. It is down to the revival of Hammer Horror that we have films like Paranormal Activity, Insidious and The Conjuring that have taken horror back to basics with its disturbing imagery and creaky houses, not people chopping themselves up or relentless torrents of blood spurting from people to make things scary.

The person we need to really thank is the author of the original novel, Susan Hill who really knows how to tell a ghost story, if you've only watched the film, I urge you to read the novel. You won't be disappointed!