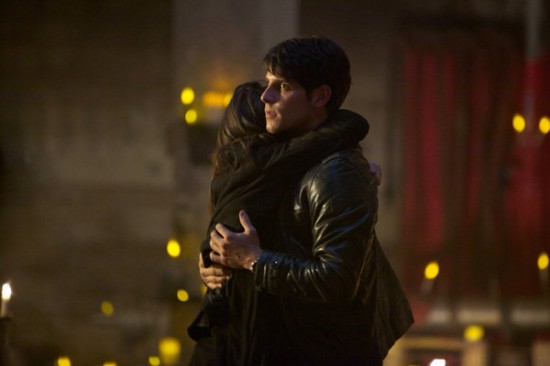 "Out they scampered from doors, windows and gutters, rats of every size, all after the piper."

The bizarre choice of creatures in this show continues to amuse me. In the previous episode we had a goat like creature which released pheromones to attract women, here we have the Reinigen, a rodent like affair who can lead rats with their violin playing skills. Portland seems to have their own Pied Piper!

We get the most gruesome death of the series so far before the main credits come on! A beloved music teacher is eaten alive by rats. And guess what, we get to watch! But well done to the producers for not shying away from it. It helps to ingrain what would otherwise be a forgettable episode into your mind. It also helps to remind us about the crime procedural aspect of the show, just in case you've forgotten it is a crime show. As Nick and Hank investigate the gruesome death, they are led to a troubled student whose father owns his own pest control company. Both the student and his father are Reinigens.

The student, played by Nick Thurston, is an outcast from the other students in his violin group because he is poorer than them. But, what they don't know is that he is a popular rave DJ, one that all visit on a regular basis. When we first see him, he is surrounded by rats while playing the violin, she we are automatically lead to think that the student is the murderer. Nick thinks he is innocent but sees that he is a seriously troubled teen. For an unknown reason, he decides to send Monroe over to have a creature-to-creature chat. The scene didn't make a whole lot of sense and didn't fill any purpose except for having Monroe in for the episode. Not that it matters as any scene with Monroe in is made all that much better. Silas Weir Mitchell's Monroe is arguably the best character in the series at the moment but he is seriously underused. But somehow, Mitchell managed to make the scene work!

Nick's beliefs are found to be true and the student, Roddy manages to get a confession from his classmates before commanding the rats with his music to attack them. Nick and Hank turn up in time to stop another rat feast. It was odd that Nick chooses to gloss over the fact that Roddy tried to kill everyone as before becoming a Grimm, he was the type who followed the rule book.

But his new role as a Grimm is starting to cause trouble in his life outside of work as he getting recognized by a repairman. The handyman runs out of the house in front of Juliette who is too smart not to be suspicious. Nick has been wondering about how best to integrate Juliette into this new world of his but we see very little of this internal conflict. Given that he and Juliette have a solid relationship, I'm very surprised that he hasn't told her yet or at least dropped some hints.

What I really like about Grimm is the way it looks into traditional fairytales and turns them on their heads as it makes you think about the darker side of those bedtime tales. But there is something that just feels off, like the producers are missing some beats here and there. At this point, I feel Grimm is a show which has infinite potential but can't apply itself. It's an entertaining show but it could be so much more than this...