Doctor Who: The Unquiet Dead Review 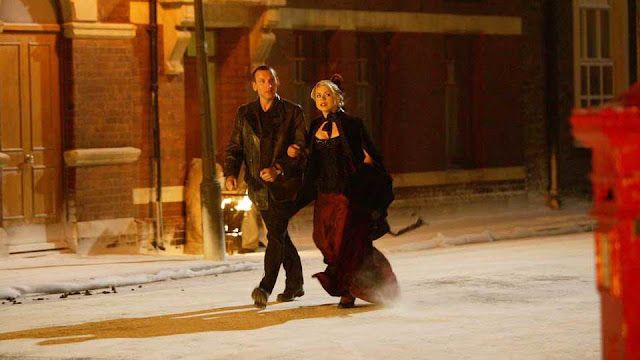 Having travelled to the future in The End of the World, The Unquiet Dead takes us into the past.

While trying to take Rose to Naples in 1860, the TARDIS lands the Doctor and Rose in Cardiff 1869 when Charles Dickens is touring the country giving a talk to thousands who read his books. But around him there are aliens who live in gas lamps and who have an affinity for a nearby undertaker's house...

We should all know how this works by now and it was no surprise that the opening episodes would due one story set in the past, present and future. And it uses Rose to show us these strange places but, unlike the previous episode, The Unquiet Dead manages to stand on its own two feet and deliver a cracking good story.

It also properly introduces us to a couple of plot threads that will stretch the entire season and possibly beyond. We get the first proper mention of Bad Wolf which surprised the audience and told them that it was something important We also get the first mention of the rift, something which will effect the show in the future and the spin off series of Torchwood which sees one of the Torchwood bases built around the rift.

These plot threads help bring the show into the 21st century and give a feeling of continuity to it. It is easier for the audience to watch this than watch Adric die at the end of one story and then go to the next and see The Doctor, Tegan and Nyssa tackling a crossword without one mention of Adric's death. Also, modern viewing audiences needed plot threads to stay invested in a series that could tread into a monster of the week routine badly.

It had been a long time since the show did a proper historical story, the last one set at some point in history was The Mark of the Rani in 1985. But unlike giving the younger audience someone obscure like George Stevenson, we get Charles Dickens, someone who should be familiar to audience members young and old. It also aids the show in giving it a more interesting factor and more credibility. You are more likely to bump into Dickens in history than you are Stevenson.

Even the Doctor is pleased to see Dickens and he appeals to his vanity to get him to help. There is of course only so much you can do in a 45 minute format so the Gelth elements are wrapped up pretty quickly and is an interesting storyline. The ending is wrapped up a little too quickly but doesn't threaten to compromise Dicken's life as it set a few years before he died.

Speaking of the Gelth, they are impressive monsters which have once again been really well done by the special effects department. They work better when they are in the bodies of the dead. And the end scene were they invade the mortuary and we see the dead bodies sitting up under their white sheets is a nightmarish image indeed!

This story is a solid 45 minutes that delivers us a cracking good story playing author, Mark Gattiss's love of the horror genre. For me it is one of the highlights of the Christopher Eccleston era.