Doctor Who: Tooth and Claw Review 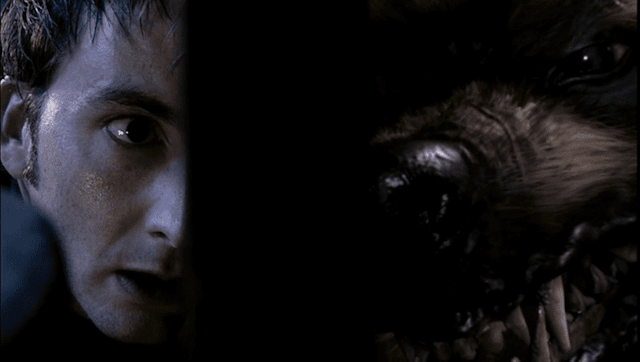 In that old Doctor Who trope, the Doctor, trying to get Rose to a concert in 1979, accidently lands the TARDIS in 1879 Scotland. Realising their mistake it is too late to go back and try again as they met a group of soldiers who are part of a convey escorting Queen Victoria to a country house. But the encounter with the Queen turns out to be quite a messy affair as the duo confront a plot by a werewolf worshiping sect of kung-fu monks who want to take control of the monarchy. You really have to hand it to the writers of the series, outrageous storylines seem to be normal in almost every adventure!

What really sticks out about this adventure is the amazing cinematography, especially in the opening sequence. Filmed entirely on location, this period adventure looks amazing. The fight scene between the monks and workers at the Torchwood manor is particularly impressive. Even the wire based slow motion flip sequence was great. Who cares if it looks completely out of place, it looks so damn cool.

Also a great inclusion in this episode was the fantastic CGI work done of the werewolf itself. Anyone who has complained about the special effects in any previous adventure would have shut up as you have only to look here to see some of the best visual effects to offer on British television. Sure, it doesn't stand up to movie standards but the transformation will stand up to any Hollywood movie. That transformation is one that stands out in my mind as one of the few times Doctor Who ever really frightened me, it still gives me the shivers to this day.

While the episode looked great, what of the story itself? It doesn't hold up too well, there are some exciting moments but the episode didn't feel anywhere near as satisfying as it should have. Like the zombie bits in the previous episode, the werewolf chases feel out of place.

Queen Victoria's decision to banish the Doctor and Rose from the British Empire feels really abrupt too. Not only have the duo just saved her life, she does so after she knights them. One could decide that her banishment comes out of helping the Doctor to sort his unnatural life out but it could also be that she didn't want her Empire to have anything to do with the Doctor's world. We also learn the origins of the Torchwood institute, something that was mentioned in The Christmas Invasion. It seems to suggest that it was Victoria who founded the organisation after the events of this episode.

It was also interesting that the werewolf could sense the wolf parts of Rose. It even refers to her time as Bad Wolf, one might wonder if it was actually scared of her.

Overall, like the previous episode, Tooth and Claw was a fairly entertaining hour with David Tennant continually impressing as the Tenth Doctor. With some witty dialogue, the writers manage to plot the over reaching series plot threads about the mysterious Torchwood. While some moments felt completely out of place for a Doctor Who adventure but it is really visually impressive and totally worth watching!