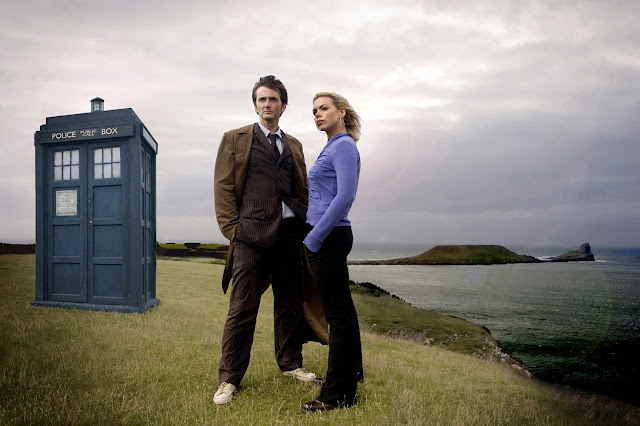 The first journey with the Tenth Doctor takes her to a distant planet called New Earth where they have been summoned to the luxury hospital in the city of New New York. Unfortunately, things go haywire when Rose discovers that one of the hospital's inhabitants is none other than Cassandra, whom she had last met aboard Platform one in The End of World, where Cassandra tried to kill everyone.

We learn that Cassandra has developed a way of transferring her consciousness into another body and she decides that Rose would be the perfect host for her. With the aid of her human pet, Chip, she manages to lure Rose into her lair in the basement of the hospital. We are then subjected to some sinister exposition and explanations towards her survival skills and the Lady Cassandra manages to take control of the Doctor's companion's body. She wants to learn the secrets the Cat People, who run the hospital, are keeping and it seems that only Rose's body will help her to discover them.

While all this is going on, the Doctor is paying a visit to another friend they met on board Platform One. The Face of Boe. The oversized face is the last of his kind and he is dying, being tended to at the hospital by the feline nurses. On the surface of everything, it seems that the cat people who run the hospital are well meaning, curing the most incurable of diseases and the Doctor witnesses first hand what their cures can do, saving people from illnesses that shouldn't have a cure. But the truth behind those miracles is dark and unethical. The cat people have harvested thousands of grown human beings and infected them with every known disease. They farm these humans for their cures in an environment that reminded me of a Borg Cube from Star Trek. Inside each pod, is a zombie like humanoid.

But as well as contending with the hospital's horrifying secret, the Doctor must work out what Cassandra has done to Rose and how to stop her when Cassandra releases all the diseased zombies from their pods.

The episode then takes a strange turn when it turns into a zombie-fest with the misunderstood farmed humans wreaking havoc and infecting everyone they touch. While trying to dodge zombies, the Doctor and Rose/Cassandra work out how to stop them by spraying the zombies with the cures to all the diseases they have been infected with.

Managing to expose the cat people's treachery, the Doctor gets the police to come and arrest the hospital staff but the remaining problem is Cassandra. The Doctor kindly agrees to take her dying form, now inside her pet Chip, back to the past where she can die in her own arms. But surely that is a paradox? Maybe those time travel rules don't necessarily apply here.

This is an entertaining episode but it didn't have the dramatic impact of the previous one. New Earth featured few interesting moments but Billie Piper's Cassandra possessed Rose was hilarious. But the zombie attack didn't feel right for the world of Doctor Who...