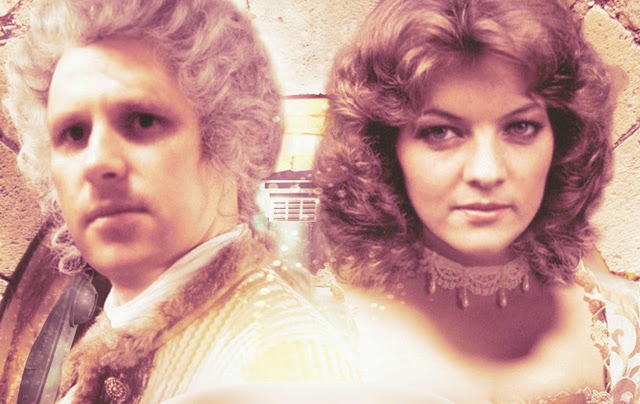 Masquerade begins on an odd note. We hear the Doctor, his young word Miss. Nyssa and her governess Miss. Hannah Bartholomew arrive at a large house by the invitation of Marquise De Rimdelle. We learn the year is 1770 and asked to imagine the Fifth Doctor in one of those god awful powdered wigs!

But the Marquise has fallen from favour and now rarely leaves her house. Instead she shares the property with her manservant, the forward Vicomete De Valdac and her niece Helene.

With our favourite time travellers seemingly stranded in pre-revolutionary France and no memory of who they were, they know enough to understand that something is wrong. There are strange glimpses of distant machines and the odd behaviour from Helene to deal with first. Not to mention the dead man in the basement who raves day and night about rats...

Author Stephen Cole makes it clear that our heroes have been misplaced but teases out the reveal slowly giving us some excellent moments of misdirection. The story has an interesting concept that does manage to keep us guessing at each twist and turn.

When everything is revealed there are some stark contrasts between their French and real counterparts. But it is the character of Valdac who is the most transformed and actor David Chittenden manages to successfully create two different personas of the same characters.

The Steam Roller Man, is disturbing, going around changing nursery rhymes. Actor Sean Brosnan does a wonderful job of creating something that could have easily been nothing.

Francesca Hunt's, Hannah Bartholomew is also given plenty to do. As the new member of the TARDIS, it has been her beliefs that have been at the fore throughout this trilogy and she is sent off in a suitable fashion. Though I will be sad that we won't be hearing any more from her, her departure is handled in a way that is in keeping with the era the story is set in.

Masquerade is a well written and executed story that keeps the listener interested throughout thanks to a number of twists and turns. Though, I think it is the kind of story that needs a couple of listens to really get everything out of it.