Doctor Who: The Harvest Review 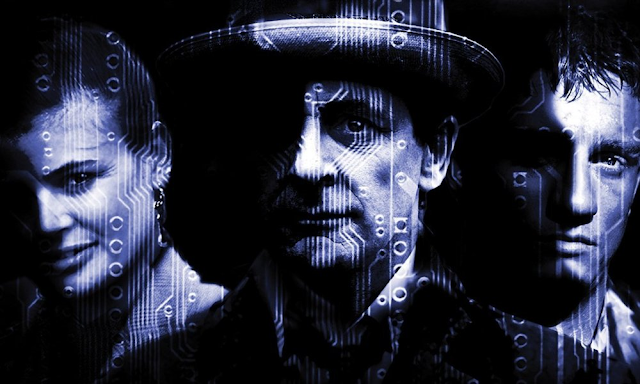 Thomas Hector, 'Hex', Schofield wakes up on his birthday expecting it to be like any other day, he will go to work at St. Gart's Hospital and then go out on a big booze up to the White Rabbit to celebrate his 23rd birthday. Except his friend Dr. Mathias has been going around telling every member of female staff that Hex fancies them, including a new woman from who works in human resources, a woman who keeps telling people her name is 'just McShane'. Then his day goes from embarrassing to heartbreaking when his friend Damien comes into A&E after a motorcycle accident and dies.

But the final straw comes when Hex and McShane are nearly run down after leaving his party for a breather by a giant who comes stomping after them both who runs almost as fast as Hex's motorbike can drive. Narrowly escaping the giant, McShane asks him to take her home. Her home is an big blue box in the middle of a car park in the middle of Shoreditch. Following her into the car park thinking it to be some kind of prank, Hex comes across the TARDIS and it's strange owner, a man called the Doctor.

The Doctor and Ace have been undercover at Hex's place of employment for a week trying to find out what the mysterious C Programme is and why it is being conducted under close guard. The Doctor suspects the Cybermen to involved somewhere and his suspicions come true when Ace is taken by the creatures.

Author Dan Abnett is no stranger to the world of Doctor Who having written the comic strip for Doctor Who Magazine as well as a number of novels such as, The Forever Trap, for the Tenth Doctor and Donna and Everyone Say's Hello for the spinoff series Torchwood. Despite coming before Torchwood was even created, The Harvest feels like an episode from that series with it's perfect mix of action, horror, humour and great characterisation. Following this story, author Joseph Lidster would go on to make this story part of a trilogy featuring the Cybermen and different Doctors with The Reaping and The Gathering, though this is easily a stand alone listen and arguably the best of all three adventures.

Introducing the new audio companion Hex, naturally this story focuses a lot on him. Despite his shock at the events unfolding before his eyes, he is established as a strong character with a very distinct personality right from his first scene. But Hex isn't the only well written character in this play, everyone from the cowardly Doctor Mathias to the main villain is well developed. Not even Ace is shoved aside to make some room for the new boy as she gets some of the best lines in the whole thing which naturally, actress Sophie Aldred whips off with delight.

The Harvest is a great mixture of detective stories, as the team try to connect the clues, conspiracy thriller as various members of the hospital try to cover up the C Programme before it descends into horror when we discover what exactly the C Programme is and what it means and what will entail to the human race. It is also an incredibly solid story with no off moments, no bad voice work and every plot point fitting like a glove.

The Harvest is a good, solid adventure and while it may not be one I listen to over and over again, it is one I occasionally go back to and enjoy all over again. And you should too.

THE HARVEST, WRITTEN BY DAN ABNETT AND STARRING SYLVESTER MCCOY, SOPHIE ALDRED AND PHILIP OLIVIER WAS RELEASED BY BIG FINISH PRODUCTIONS IN JUNE 2004.