Doctor Who: The Gunfighters Review 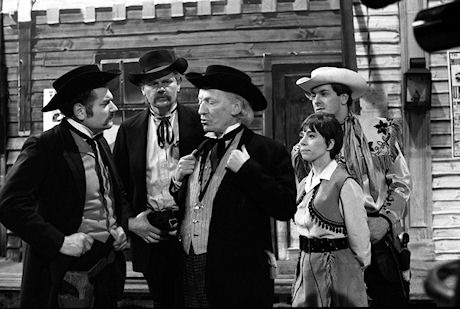 Anyone fancy a rousing chorus of Ballad at the Last Chance Saloon? No, not me either. But try not to let this tune stop you from watching and enjoying this story as it is no where near as bad as the fan lore would have you believe. For almost as long as the story has been around, it has been considered one of the worst Doctor Who stories of all time. But this isn't true. It actually isn't half bad.

Its true that the story has a few linguistic missteps, mainly because it is full of English actors trying to play American Wild West characters. But the accents aren't too bad, solidified by the fact that at least one of the actors was Canadian, so his doesn't sound to bad. It is also true that this story couldn't be much more unlike from the true events of the Gunfight at the Ok Corral if it tried. But then again, why should it be? This is after all, Doctor Who. Maybe this is how it happened in this universe. The overriding fact of the matter is that this story isn't the worst that Doctor Who has ever done, it is a pretty entertaining juxtaposition of humour followed suddenly by violence and terror.

William Hartnell appeared in many comedies in his day and often tried to get more funny moments in his serials on television. While he didn't always succeed, he is evidently having a ball throughout this tale which is full of funny moments even in the climatic gun battle. He takes delight in calling Wyatt Earp "Mr. Werp" during each of their meetings. And generally misunderstands everything happening around him. Though, looking back, this confusion could be the first sign of his impending regeneration, the story for which is not to long after this one. 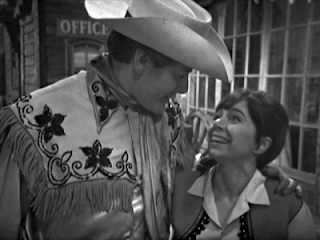 As for the rest of the cast, the completely underrated companions Steven (Peter Purves) and Dodo (Jackie Lane), seem to be continually excited by what is unfolding around them almost as if they are looking forward to a good old rootin' tootin' shootout!

The guest cast are also having a ball, Laurence Payne is delightful as the completely rotten Johnny Ringo, Reed De Rouen as Pa Clanton and John Alderson as the friendly Wyatt Earp. However the standout performance on the guest star front comes from Anthony Jacobs who is the charming while sardonic Doc Holliday, who shares a number of great scenes with Jackie Lane as Dodo. Their best scene is where Dodo pulls a gun out on Holliday who gives into her demands. Dodo then drops the gun and asks for a glass of water because she was afraid of the gun. The pair seemed to really spark.

As I stated above, the biggest problem with this story is the annoying song that appears every five minutes. Had the tune, which, while lively is irritating, been heard at the beginning and the end of the story, then it wouldn't have been so bad, but because it plays every time a scene changed, it begins to grind on our nerves. Although eventually the song begins to comment on what is happening on screen but by the time this happens we are beyond caring.

Fortunately its the performances that help to save this story as do the excellent production values. While there are times when the set looks like something made at the BBC Studios, there are also plenty of moments where it looks like they are in the Wild West. There is some really nice dialogue, great acting and costumes. There are also some great shots especially in the final episode which houses the final gun battle which is surprisingly tense, especially when Dodo gets involved in the action and it looks like its curtains for her.

Overall, The Gunfighters is a testament to all who were involved in its creation and while the end results do fall short of intentions, but not from lack of trying. Its time Doctor Who fans everywhere re-evaluated The Gunfighters!