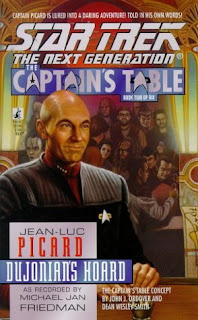 Rumours have spread to Starfleet of an ancient treasure of powerful technology, a crew of brigades sailing through the infinite darkness of space, a missing Starfleet officer and a lost civilisation in a pocket universe caught up in political conflict. Who are Starfleet going to turn too to investigate other than Captain Jean Luc Picard?

The story say's that in ancient times a benevolent race called the Harbitians came to Cardassia. They didn't leave much of their glorious civilisation behind except for a number of tombs. Some of their artefacts had jewels called "glor'ya" which were found to have similar properties to dillithium but is far, far more effective. The legend says that the Cardassian, Dujonian, disappeared with the treasures. All of this was merely a legend until Starfleet officer, Richard Brant vanished and rumours began to spread about a group of pirates chasing him because he apparently knows the site of the lost treasures.
Needing someone with skills to perform a search and rescue, and to authenticate the lost jewels, Starfleet send Jean Luc Picard to locate and infiltrate the pirates and bring back the jewels and Brant. Picard takes Worf with him and the pair begin their quest.

The first person account way of storytelling works well for this novel. Picard analyses his situations with a quiet reserve, but often takes the bold stroke when it is necessary. He avoids potential conflicts wherever possible but isn't afraid to pitch in if the need should arise and he does so with the bravery the surrounded the character in the television series. As usual his humour is dry and understated. A true natural leader, he trusts his life with the best people at a moments notice without any doubt.
Although there are plenty of television and book's which focus solely on Picard, never before had we been able to get such an in depth into the workings of the man.

However, I didn't like 'The Captain's Table' idea as I feel it took away from the tension of the story with other characters interrupting only to ask Picard what happened next. It seemed entirely unnecessary as none of the characters around the table offered anything to the plot or where characterized in a way that made them interesting.
I feel that a first person story told from Picard's 'mouth' would be far interesting and would succeed in keeping the readers invested in the story.
It is also unfortunate that the story, or tale, as it is named in the book to separate the chapters, is also pretty formulaic. Picard and company travel through a wormhole and encounter a civilisation in the middle of a civil war where his group sides with the rebels. There's not a lot there that is new to us long time fans of the show and various spin off merchandise. The final chapter is the first chapter of the next book which focuses around Captain Sisko of Deep Space 9 and has been told as if the whole series is one continuous narrative. The book finishes with a 14 page biography of Picard's life and times but is nothing new to fans of the show.

Dujonian's Hoard is an enjoyable story that shows Jean Luc Picard in a strong light. Where the story falls are the scenes that take place around 'The Captain's Table', and the author, Michael Jan Friedman might have done better with getting rid of those scenes altogether. But, a first person account of an adventure told by of Star Trek's most popular captains is an opportunity that no fans should miss.

DUJONIAN'S HOARD, WRITTEN BY MICHAEL JAN FRIEDMAN WAS RELEASED BY POCKET BOOKS IN 1998. IT IS NOW AVAILABLE EITHER IN THE E-BOOK FORMAT OR FROM VARIOUS SELLERS ON AMAZON.