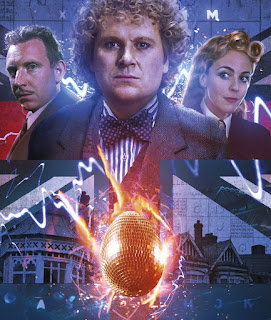 In Bletchley Park in 1941, Britain's best and brightest mathematicians are trying to crack Nazi codes in an effort that will one day turn the tide of the war. These said mathematicians include the genus Alan Turing and the strange new arrival, Doctor John Smith, a man with mad blonde curly hair and who keeps a strange blue police box in his office...

Coming hot off the heels of the 2014 film, The Imitation Game, this is a great time for the Doctor to pay a visit to Bletchley Park. It oddly feels right for a historical adventure featuring the Sixth Doctor who manages to blend in thanks to toning down his costume in a site that Doctor Who hasn't visited before.

Turing is only mentioned in a passing comment in this story as author Matt Fitton chooses instead to focus on his own group of characters, Constance Clark and Sylvia Wimpole from the Woman's Royal Naval Service, a particularly shady double agent, a British agent and a German spymaster who manages to get himself mixed up in the events that unfold throughout the story.

Finding himself stranded in this time the Doctor tries to get his TARDIS working once again and ends up getting all these characters dragged into a conflict with a mysterious alien enemy - a creature composed of nothing more than sound waves. While this is one of the more strange Big Finish creations and scripts, it oddly suits the location, time zone and the audio medium that the story is being told through.

I think how much you get from this story will depend on how much you know about this era or how interested you are in it especially as the decoding machines will be used to fight the aliens towards the end and it does get rather complex in a way that may possibly confuse some listeners or ensure that a second listen is needed to fully understand just what the heck is going on!

Nevertheless, it is clearly apparent that Matt Fitton has done some really in depth research into this era and is clearly trying to get his facts right whenever the need arises! Also included in this story is the usual tropes that one would find in a Second World War - double agents, spies, soldiers, codebreaking, plenty of double crossing and even a trip on a Nazi submarine.

What this story is particularly notable for is the debut of new audio companion Constance Clarke played wonderfully by Miranda Raison. Many listeners will have already her in The Last Adventure, an epic story that came out a month before the release of Criss Cross, however, if you are poor like me, then this will have been the first time that we hear Constance. And the author and actress don't fail. Constance is instantly likable, a steely, no nonsense companion that won't take any trouble from this Doctor. In her first scene, she takes the Doctor down a peg or two because of his overworking of some of her Wrens. We also get a couple of mentions of her missing husband, someone she is desperately trying to find but not getting any help from anyone. No doubt this is too set up a future emotional story arc.

With the previous Sixth Doctor story, The Last Adventure filling in a big gap in this incarnations continuity, Criss Cross is somewhat lower key adventure for Colin Baker's Doctor. But it is a solid and enjoyable adventure with an intriguing alien, a very fitting setting both for the story and the Doctor and sees the introduction of a compelling companion who promises to be one of the best yet!