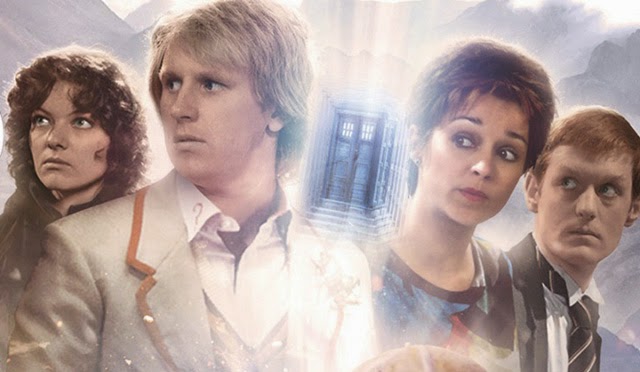 Andrew Smith was just 17 when he penned the story, Full Circle for the eighteenth season of Doctor Who in 1981 and you can admit it, your hating him a bit right now. But then he disappeared from the world of writing for 35 years and no one knows quite what happened. Well, he became a policeman obviously. Its pretty clear that's the next step in a writing career after penning such a cracking good story. But now he's back and has contributed to a number of Who audiobooks including, The Invasion of E-Space, The First Sontarans and Domain of the Voord.
Now he has returned to the planet that slept for Mistfall which sees the Fifth Doctor, Tegan, Turlough and Nyssa return to the planet of Alzarius and they find how things have changed, hundreds of years on from the Doctor's last visit.

Some things feel exactly the same as we left them, there are deciders who make the laws and the outlers are back too to try and halt what the deciders are trying to do. But when a new starliner arrives on the planet, The Doctor quickly realises there's been a change of attitude. While the old Terradons lived in fear of the Marshmen, the new decider wants to find them, talk to them and learn about them and their ancestors who used to live on the planet and like the Doctor tells her. It is a dangerous plan.

While Full Circle dealt with racism and xenophobia, Mistfall comes from some 35 years older and goes deeper into exploring the foolish optimism of misguided imperialism with Fem, a Marshman who has been brought up as a human by the deciders and is used to bridge the gap between human and Marshman. It also tackles the weight of political decision making the ensuing interpretation by those it will affect with a natural disaster being diverted from a human settlement to an alien one and the misinterpretation of accident as deliberate attack.
Ultimately the story is about not jumping to conclusions and not believing that your people are 'better' than others no matter how beneficial you think your people might be. It is indeed lessons our world needs to learn nowadays.

Smith's script really delivers and the leader of the Marshmen is really well characterised as a potential new threat to the explorers. But if you haven't seen Full Circle then this story may not be for you as it relies upon the listener having to have some knowledge of the television serial it is based upon. This story may have worked better as a larger story detailing the events on New Alzarius that led to Decider Merrion landing on the planet Alzarius but that's my opinion and the story works well without dwelling on it.

It is also strange hearing an actor from the new series appearing on something that is set in the old series. Jemma Redgrave play's Kate Stewart on the new series and while she does a good job as the Decider on this story, I kept imagining her as the Brigadier's daughter rather than an entirely new character.

Smith's writing career renaissance continues strongly with this story which expands a great deal on the story he created as a teenager and tackles old and new issues with the maturity that comes with age.
Mistfall is a story worthy to be called a sequel of Full Circle but I do feel that it wouldn't have worked well as a televised stories with this team in the 1980's. It would have seemed like overkill and been too much far too soon and the idea would have become over milked. However, it's revival 35 years later proves that the Marshmen are better than ever!