Doctor Who: The Bride of Peladon - Review 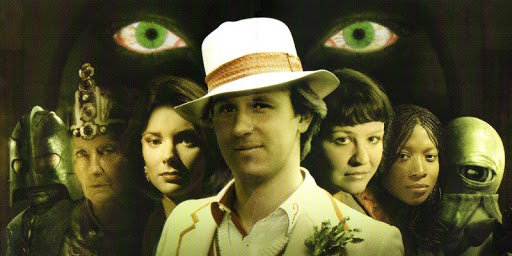 I'll admit to never having been a fan of the Pertwee Peladon stories, and I didn't like the Virgin New Adventures book, Legacy, also set on the medieval planet. But in this Fifth Doctor adventure, death and doom seemed to stalk the passageways of Peladon once again. With the King's Mother having been mysteriously killed and his grandmother secretly worshiping an old religion, an Ice Warrior has vanished, and the King is at a loose end as to what is happening. To make matters worse, an Ice Warrior representative is on his way to investigate and there is an arranged marriage to be performed.
In the two televised Peladon stories, there are storms raging outside, this time though, those storms are taking place inside when the Fifth Doctor, Peri and Erimem arrive. The Doctor of course tries to smooth some ruffled feathers and discover what is going on. The Kings grandmother, Beladonna, takes to Erimem instantly, thanks to her ancient Egyptian heritage which lends itself wel to the politics of this new world. Peri meanwhile finds herself as both accomplice and captive of the Ice Warrior, Zixlyr, who it transpires lured the TARDIS to his crashing spaceship and who now has plans to topple the rulers of the planet.
I was surprised that I really enjoyed this one. As I said, I've never been a fan of the Peladon stories, but I've always been a fan of the Fifth Doctor, Peri and Erimem stories. Anyone familiar with the works of William Shakespeare will notice the ties to Hamlet in the opening scenes, with a knockoff of the Witching Hour speech. But things quickly take a turn into familiar Peladon stories and then into Egyptian Mythology. The Hamlet theme though, never pays off, its still good but its a little jarring nonetheless. 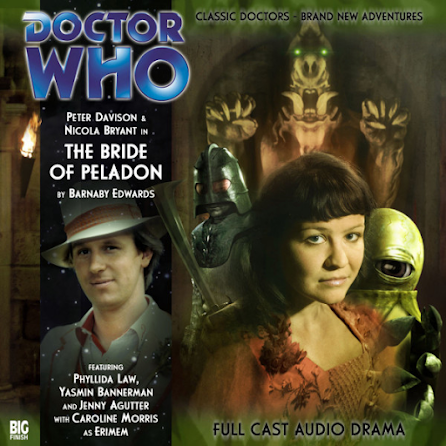 Author Barnaby Edwards has penned a pretty solid story though. What helps to set this story apart from others from the range is that there is no real villain here as everyone has reasons to be behaving the ways that they do. This lends itself to the feeling of political intrigue as everyone is at crosshairs with everyone else.
I was a little disappointed by Erimem's departure though. Sure it does lend itself to where she came from originally but there was a much better departure for her a few scenes before the end when she seemingly sacrifices herself to save her friends. Not only would that have been much more in keeping with her character, but it would also have helped to explain why the Doctor was so desperate to save Peri in presumably the next story, The Caves of Androzani as he's lost yet another friend.
But Edwards blends themes from the previous Peladon stories nicely into this one and its a really strong outing for the Fifth Doctor, its just a shame the same can't be said for Erimem.