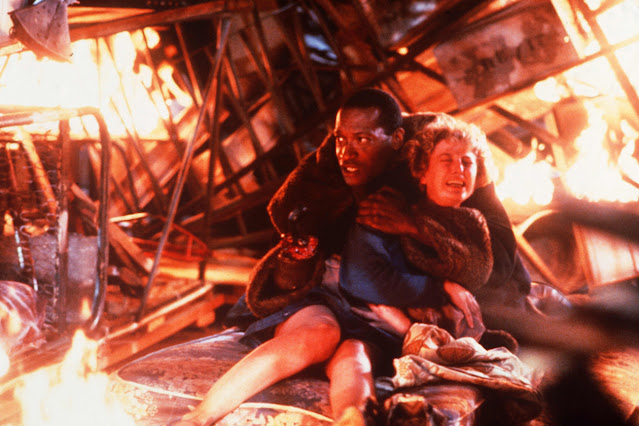 By their nature, Urban Legends are designed to absolutely terrify us. They are designed as funny stories or jokes but somewhere along the line, they begin to take on a life of their own, forcing us to wonder if they had a penny of truth about them in the first place. 1992's Candyman begins with a story about a woman who lives in a tower-block calling 911 for help but isn't taken seriously, simply because what she is saying is impossible. Not long after her body is found and she has been savagely murdered. It seems that the Candyman has struck again.
But who is this mysterious figure? According to the movie, he's an immensely powerful being who haunts a tower-block called Cabrini -Green in Chicago. He lures his victims in with sweets filled with razor blades, hence the name and operates out of an abandoned apartment on the upper floors of the Cabrini-Green tower block.
Armed with this information, the two main characters, Helen Lyle, played by Virginia Madsen, and Bernadette Walsh, played by Kasi Lemmons, are part of a university group who are investigating the truth behind urban legends. Lyle is trapped in a loveless marriage with a college professor who is having flings with his students on the side and as a result, she really throws herself into her work, dragging Walsh into her interviews with the residents of the horrible looking tower block.
Director, Bernard Rose is someone who has a past with horror movies, having directed 1989's Paperhouse, and once again, he keeps things along a similar line, with people's stories becoming as much a part of the movie as the actual movie itself. Paperhouse sees a boy's feverish dreams seemingly become real, in the same vein that Candyman becomes real thanks to people's stories about him. As the film builds up towards the third act, Rose keeps us wondering if the Candyman is a supernatural entity or a serial killer using the legend as a way to get away with his murderous acts.
Instead Rose poses the question that if enough people believe in something, why can't it be real. Why can't the sheer psychic energy around this mythical entity, make something real. Would the Candyman take a dim view of the investigators need to know about him? And if the Candyman isn't real, can someone be tricked so completely into believing him, because he existed in the mind of that person, does that make him any less real than a flesh and blood creature? There is something instantly likable about Lyle and Walsh as characters and their demises towards the end of the movie really hit hard.
Rose also has a good handle on the locations he uses and he seems to understand that the urban locations are just as important as the legends that inhabit them. It's long been believed that empty rooms on the upper floors of any tower block are inhabited by gangs and whether we realise it or not, subconsciously, we seem to perceive a threat to the two woman as they investigate.
It's surprising that for a film named Candyman, Tony Todd who plays the mythical man, is hardly in this movie. But when he is, he really steals the scenes, his voice instantly recognisable and terrifying. But this is where the plot thickens and Rose skilfully makes the audience ask the question whether Lyle is actually the killer or if Candyman is using her. But like the legend that spawned him, no one believes in the Candyman, which doesn't bode well for Lyle who is arrested for murder and then sectioned.
While there are some plot points that might not hold up in the cold light of day, but it didn't bother me too much when I was watching this. I think what helps Candyman stand up as a cult classic amongst many other horror flicks is that its horror comes from the ideas the movie poses, as opposed to the gore and jump scares that litter films from this genre today.