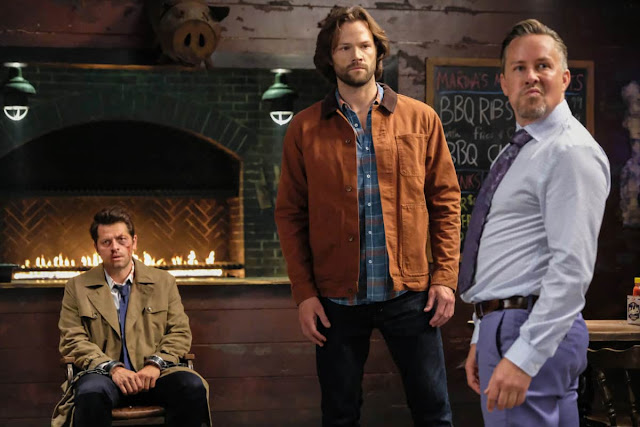 The previous series ended with Dean missing, Sam on his own, Jack without his grace and Castiel as little down in the dumps. And now Sam has had to take the final step into adulthood, he's grown a great beard and stepped up to lead the band of hunters that they saved from the alternate universe in the previous series. He's really good at it too, Dean is a good leader but I would say that Sam gives a little more thought to things, considering all the things that can go wrong, rather than just charging in. And notice how Sam out witted the would-be-Crowley by really just using words, Dean would have probably gotten people killed, at least Sam managed to keep everyone alive.

I didn't expect Kip, the demon who wanted to become the new Crowley, to survive throughout the series, he was a little irritating and no one could beat Crowley for me, but Kip did pose a bit of a problem for Sam and the gang. A demon who travelled the world with Genghis Khan, Kip has spent the last six-hundred years murdering and destroying things and his earlier meeting with archangel Michael, currently using Dean as a host, made he wanting more. He was also desperate to have the same kind of relationship with the Winchesters but as Sam puts it, he is no Crowley.


The battle in the bar towards the end was a great action sequence and it was great to see Mary and Bobby getting to be action heroes. I really missed Bobby when he died in Series 7 so its nice to have him back now, even if he is from an alternate reality!

From the beginning of the series, I've always thought that Jensen Ackles was the stronger actor out of the pair, with all due respect to Jared Padalecki, but its been great to see Padalecki to really develop his skills over the past fourteen years, and he really shines here, dare I say it, I really think that Sam could lead the show if he had too?

Which brings me nicely to Ackles who once again shows how great he is as an actor, almost entirely changing his performance here, now that Dean is possessed by Michael. A part of me really enjoyed seeing him playing this new character! Though one does wonder how much of dean is still in Michael, will he eventually break free and control his body once again. I'm guessing so, but it'll be fun to see him getting to play as Michael for a while!

I was also pleased to see that Jack survived the finale and, now he is minus his grace, is still playing an important part in the bunker-gang's lives, even if he is having to learn to defend himself all-over again. It was nice to see Bobby take him under his wing and it looks to be a great pairing with the two. Lets just hope that nothing happens to either of them over the course of this series!