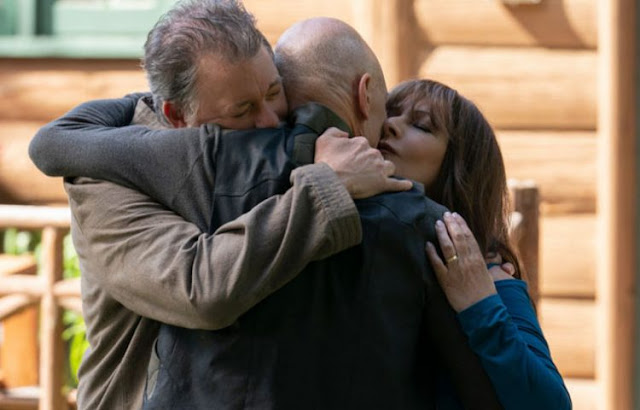 Sometimes when a show is in its home-stretch, a little bit of brevity can be damaging to the pacing. But sometimes you get classic outings, much like this episode, which allows us deeper looks at characters and what makes them tick, while bringing back old favourites. What Nepenthe reminds us is that this show is about one thing: Jean-Luc Picard.

With the last episode, The Impossible Box finally giving us the meeting between Picard and Soji, following her activation, she is currently discovering who she is. Everything she's known has been a lie up to this point. Picard goes through something similar, this is the episode where he finally wakes up. It's about time.

It was in the pilot episode where one of Picard's friend, Zhaban told him to be the Captain they all remember. But Picard has been anything but that. Mainly because he's been trying to be preciously that. 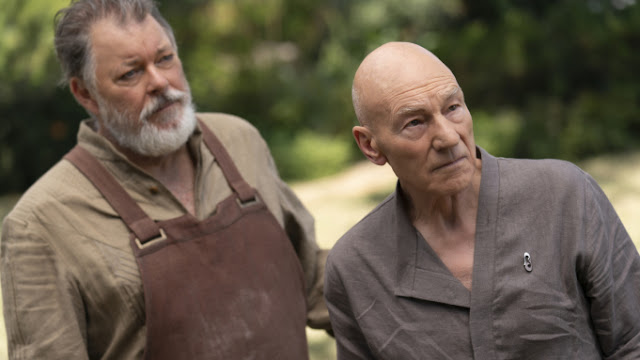 Let me explain. Following his departure from Starfleet, Picard put himself into 14 years of isolation. Now that he's found a worthy-cause he still views the world from the cosy-view he had in The Next Generation, where a united crew went out to explore the galaxy and put wrongs-right. But the universe changed when he was on his vineyard, now the line between good-guys and bad-guys has blurred and now he is joined by a crew of distant, broken and inexperienced misfits taking on a much-darker universe.

While the audience see this marked change in the status-quo of the universe, Picard doesn't. He's returned to a universe he once knew without any real plan. He wonders why people don't treat him the same, he got kicked out of Starfleet asking for a ship and crew just because he's Picard. He throws down a nasty sign and then picks a fight with the locals oblivious to their pain and anger. And he then leads a round-of-applause when Raffi destroys a friendship to help him get clearance onto the Artefact and then wonders why she is drinking away her sorrows. He has consistently not gotten it. Times have changed and luckily for us, Nepenthe finally forces Picard and Soji to both wake up to this new world for them. Picard finally sees the state the universe and his friends are in, while Soji has to face the truth of her life. She's always been an android and everything she thought she knew had been a lie. Picard was right then to take them see some old friends' because who better than Riker and Troi to show them how the world works now?

I can't explain my excitement at seeing Riker and Troi returning to the Star Trek fold. Although we knew they were coming back from the trailers, it was fantastic to finally see them back with Picard. Jonathan Frakes as Riker feels like he has never been away from the role, despite looking much older and Marina Sirtis proves herself to be as great now as she was then, adding a calming effect over the episode, that she always brought to The Next Generation. Riker and Troi's daughter Kestra, was a great inclusion to the episode, helped along by a fantastic performance from younger actor, Lulu Wilson. 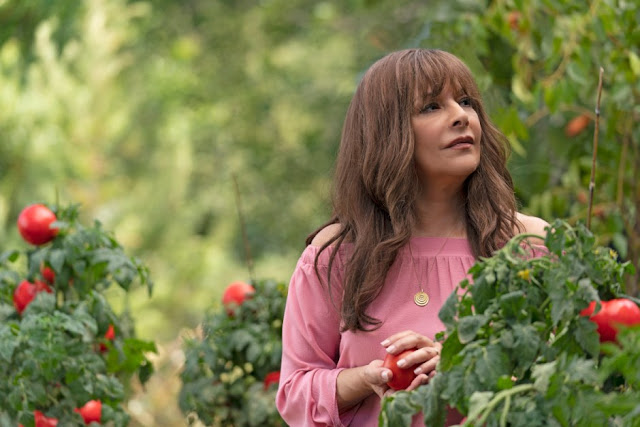 I won't lie, I was expecting the happy-lives of Riker and Troi to be disrupted throughout the entire episode with the Romulans turning up to upend their happy family. Luckily for them though that never happened, I don't think I would have liked seeing that, though I would have loved to see them joining Picard's new crew!

What was also interesting was seeing the positive reaction to this episode, while Stardust City Rag, which featured the return of Seven of Nine another popular character, wasn't met with the same universal praise. I don't know why, I liked Seven's episode and I'm pleased to see that she is coming back in the next episode. But this probably shows how universally loved The Next Generation is and how popular that particular crew continue to be, thirty years on!

Normally I don't like breathing-episodes like this when the plot and pace of a television show has finally picked up, but Nepenthe felt a lot more like an episode of TNG than Picard and I think that helped. The darker tone of Picard and Discovery is great, but a little sidestep into what you already know isn't a bad idea either. And I'm hoping to see Riker and Troi at some point in the future. But even if we don't, then it was a great way to say goodbye to them, hugging Picard and Soji and then heading back home.