Doctor Who: The Haunting of Villa Diodati - Review 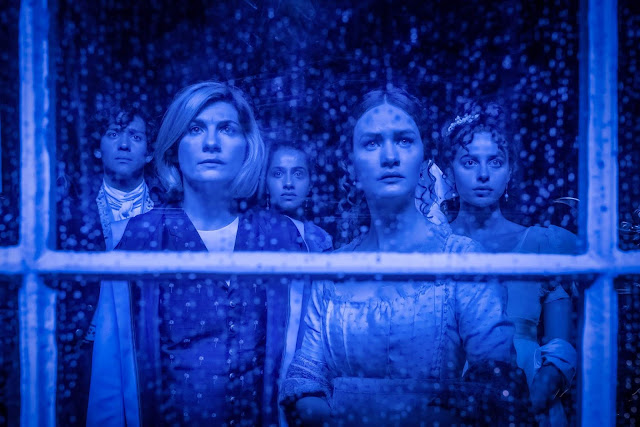 Doctor Who and haunted houses is something that's done quite often, sometimes to great effect and sometimes, we end up with stories like Hide, a great premise but is quickly ruined by the main threat once its revealed. But it seems that this production team has learnt the mistakes of the previous ones and understand that a little atmosphere goes a long way. The Haunting of Villa Diodati is an episode that can be picked apart on many different levels, but it so engagingly spooky that its easy to ignore the faults in it. And I'll easily say that this is one of the best Doctor Who-haunted house stories out there as the writers effortlessly blend the 19th century with unsettling sci-fi ideas and start to wrap up the series-arc. The Cybermen are also a great villain, though in the modern series they've been a little overused. I was happy then that this story does was Dalek did for the Daleks. It explores one lone-creature and gives it an interesting twist as it explores the creature's isolation.

Picking up where the last episode left off with the Doctor taking her friends to meet Mary-so-to-be-Shelly, the group arrive at Lake Geneva in 1816 and the Villa Diodati. They expect to find Lord Byron, played by Jacob Collins Levy and Mary Shelly, played by Lili Miller, in a contest to see who can write the scariest story ever. Instead the group in the Villa are more concerned with partying and drinking and Mary's husband, Percy Shelly, played by Lewis Raynor, is nowhere to be seen. The Doctor frequently relays to us that she's getting bad vibes from the house and ghosts seem to lurk in every corner. 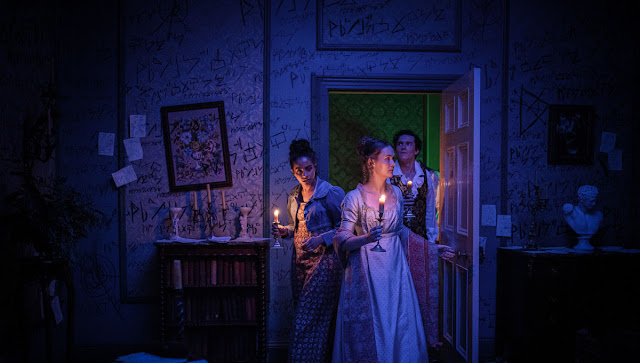 The first half of the episode is really great, starting out like a Hide-like episode with lightning strikes offering us glimpses at the spirits haunting the house. And there is a moving skeletal hand that is used to great effect, and there is some great humour to balance out the horror aspects. Most of it comes from Lord Byron but Doctor Polidori, played by Maxim Baldry and Ryan who have the best scene of all, as Polidori challenges Ryan to a duel and Ryan gradually realises that he means to get a gun. And Mary's sister, Claire Claremont is looking for a way to get out of her toxic relationship with Byron, something which in real life, never happened and it had tragic consequences.

Of course, whenever ghosts have been included in Doctor Who, it always has a sci-fi reason. And the new writer, Maxine Alderton gives us some clever ideas in that department, mainly thanks to a house that seems to rearrange itself, reminding me of the Fifth Doctor debut adventure, Castrovalva. When the group get separated and are shouting at each other from different areas of the house is a rather imaginative idea for the exposition dump. And Polidori's sleepwalking is also tied to the main mystery with it allowing the Doctor to work out what is really happening here. There is a perception filter at work but because Polidori is asleep, it doesn't work on him and he seems able to walk through walls but he is just subconsciously remembering the real-layout of the house.

But it all quickly turns out that the haunted house is just a way of hiding an object from the Cybermen. The Cyberiam, an interactive A.I. with all the knowledge of the Cybermen stored on it has been let loose in Percy Shelly and he is trying to protect everyone from the mysterious Lone Cyberman, the thing that Captain Jack warned them about in Fugitive of the Judoon.

Much like Into the Dalek did, this episode offers us a new way to look at the metal meanies. The Lone Cyberman or Ashad as he's otherwise known, is only half-completed and lacks the emotional inhibitor that other Cybermen are equipped with. He's a very angry Cyberman, played by Patrick O'Kane, and delivers a very unsettling portrayal. He's appearance is of course what inspires Mary to write Frankenstein and there was a nice moment towards the end when she tries to reach out the humanity left in the man that gloriously backfires. Because he still possesses his emotions, he seems to be even more dangerous than the other Cybermen and he tells us he murdered his own children when they joined the resistance against the Cybermen. It's one of the darkest lines ever written for Doctor Who!

Of course, there are a few questions left to ask, why didn't the Cyberiam want to merge with Ashad? Was it because of his human side or the Cyberman side? Are Percy and then later, the Doctor really strong enough to survive the Cyberiam integrating itself with them, or was that just a plot device? Of course, this is the Chibnall era so it could be either, but I'm hoping that the Cyberman finale will wrap these questions up.

Perhaps where we should be less forgiving is in the episode's final act and its flaws in handling the guest cast. It's understandable that the Doctor should be very excited to visit the literary heights of 'the year without a summer', but putting this many historical figures into one episode feels like it might have been a little of overkill. But the strangest thing is how the episode seems to hinge on Mary Shelly getting the inspiration to create Frankenstein, only for the episode to end on the idea of Percy Shelly dying. 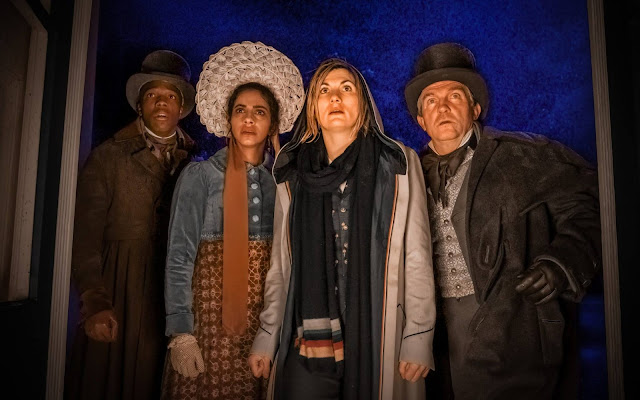 Percy Shelly was a romantic poet in real life but given how I had no idea about that until I looked into it, I would hardly put him down as one of the historical figures who would change the future if he was supposed to die before our known history told us he did. The Doctor angrily tells Ryan that word's matter and his premature death could have incalculable consequences for the future, but the episode never really explores the idea of what would happen and the literary focus feels a little buit too scattered to really mean anything. The idea that changing the past will cause ripples is something that the show has explored before, but leaping from Percy Shelly dying six-years too early to Ryan Sinclair is then not born, is quite a stretch.

But its all clearly a way of getting the Doctor to have a great speech about her being the top of this totem pole, no matter how the companions feel about it. When push comes to shove, she is the leader who has to make the decisions, and this time, she chooses to ignore Jack's warning, giving the Lone Cyberman what it wants. Bringing out the darker side of the Thirteenth Doctor's nature seems something that this series has delighted in doing and I'm glad to see it carrying on here.

For me though, this is one of the strongest Jodie Whittaker episodes we've had so far. At its worst, its a fun historical romp. At its best is an exhilarating Cyberman story, that reinvents the creatures and once again gives them some much needed threat. And its an exciting lead into the next two-part finale for the so far, strong series.