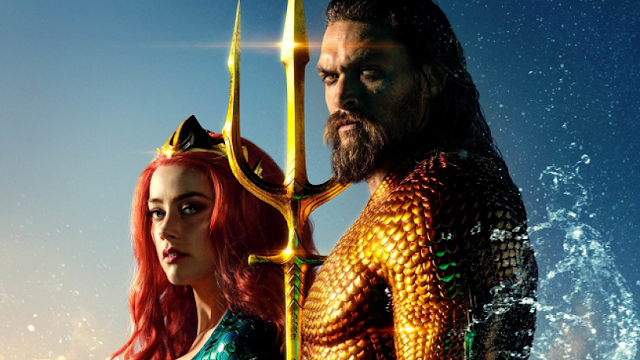 Any comic book fan will fondly remember the 90s run on Aquaman from Peter David, whether they read it originally or picked it up from the reprint graphic novels, but Aquaman received a bit of an upgrade. Gone was the sea-horse riding version and in came the dark, broody and bearded Arthur Curry. Under David, Aquaman was given a lot more back story and looked the captain of a ship, with a harpoon for a hand. Aquaman had had a previous attempt at a revamp in the mid-80s but it never really took hold, David managed to undo all the bad-press the character had received through his run and it seems this movie version of Aquaman, played by Jason Momoa will give the character another needed makeover.

Following on from his blink-and-you'll-miss-it appearance in Batman V Superman: Dawn of Justice, and his proper introduction in Justice League, this version of Aquaman already feels much different from those iterations. In Justice League he was the darker, broody type seemingly straight out of Peter David's run. This time, James Wan is directing and he feels much more fun and party-like and Wan and Momoa make no attempt to hide the cheesiness of the character.

And that is what this film is, one big cheese-fest. And that is what sets it apart from much of DC's other recent movie putouts as its fun. Of course, his origins lie in parent issues and birth-rights like much of DC's other characters. But this time, they delve right back into the origins of his 'species', as it transpires that Atlantis did exist and sunk millions of years ago. Over time the inhabitants learnt to breathe underwater and so look different to the Atlantians that continued to exist on land. Arthur bridges the two, his mother could breathe underwater, while his father was a human lighthouse keeper. Not all of the Atlantians were lucky though and some evolved into horrible creatures, now hidden away in the ominously named 'Trench'. 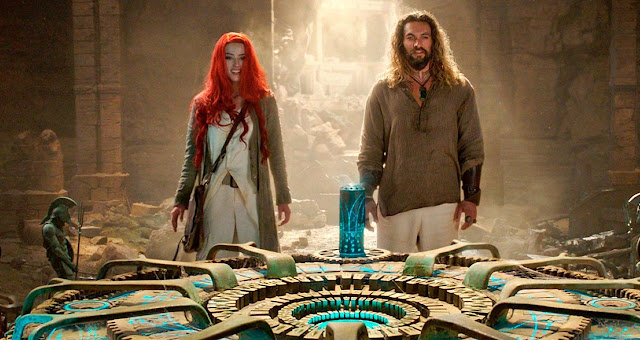 Arthur's mother, Atlanna, played by Nicole Kidman was forced back to Atlantis where she had return to her arranged marriage. Living unaware of his mother's continued existence as he believed her to be dead, Arthur grew up swimming around the world, saving marine species and helping boats and submarines in trouble. Unfortunately for Arthur though, his life is going to come crashing down around him, as his half-brother King Orm, played by Wan stalwart Patrick Wilson, has decided to kill Arthur to remove any other claim to the throne and claim the name Ocean Master. Keeping the 'cheese-factor' going is that when the name Ocean Master is muttered it literally ends the scene with an EastEnders, 'dom-dom-dom-dom' musical cue. And then there is Dolph Lundgren riding around on a seahorse. At least this movie isn't afraid to admit that superheroes are cheesy, like much of the other DC output.

Arthur finds himself on a quest to become king aided by Amber Heard's Mera and William  Dafoe's Vulko, they plan to make Arthur and Orm fight for the throne. When things go wrong, they instead find themselves on a mission to find the long-lost artefact Trident of Atlan. This quest was no doubt a production plan to use the big budget it had been given and allows Wan to show off many different locations, both on land and under the sea.

James Wan made a name for himself producing and directing horror movies, including Insidious and The Conjuring, so it is strange to see him entering the world of superheroes but he equites himself well. He works well with the main cast, getting instantly enjoyable and likable performances from Momoa, Heard and Dafoe, where the film stumbles though is that the other Atlantians aren't any fun at all, making it hard to care what happens to any of them one-way-or-another. And the secondary villain, Black Manta, played by Yahya Abdul Mateen II is far more interesting than Wilson's Orm. This seems to be a problem with the DC movies, the villains aren't interesting and not enough attention is given to them to correct that.

But Aquaman isn't a failure by any means, its fun, camp and hugely enjoyable. With Wonder Woman being great, as was Shazam, Aquaman joins the DC ranks of great superhero movies, even if there are still a few things that need working out, no doubt, one day they'll finally manage it!