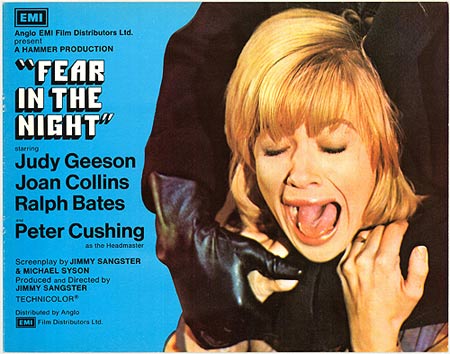 Fear in the Night came out in the early seventies, just as they were trying to turn their movies into more psychological terror rather than full on monster movies. It wasn't the first time that Hammer had done something like this, in the early sixties we had movies like Scream of Fear and there was a splattering of others, including movies like Straight on Till Morning. But Fear in the Night, despite boasting a formidable cast, including the likes of Peter Cushing, Joan Collins, (yes you read that right), and Ralph Bates, you had a long association with Hammer, this is a movie that falls by the wayside somewhat. This isn't one of the best movies Hammer has to offer, but certainly isn't the worst and its a shame that its not more well known.

After she is attacked, Peggy, played by Judy Geeson and her husband, Bob, played by Ralph Bates, move into a small cottage off the side of a large country-school. Bob has gotten a job as the school caretaker and groundskeeper and has to get the school ready for the new term. But it doesn't take long before Peggy realises something is wrong. There are strange noises coming from the school building, like a class in session despite there being no students. The strange headmaster, Peter Cushing and his wife, Molly, played by Joan Collins are acting particularly oddly as is Bob, who after Peggy is attacked again leaves her alone for a number of days. Things finally come to ahead and Peggy is forced to question who she can really trust. 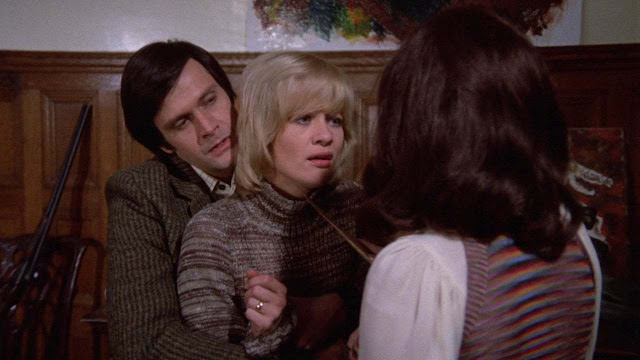 The script from Jimmy Sangster, who had a long association with Hammer going all the way back to the late 1950s, was to be his last and its strange why he chose to pen such a psychological movie rather than another creature-feature, we'd all known to come and love. But thinking about it, this movie came out just before Hammer Horror released their short-lived anthology television series, and as most of those episodes were more psychological, one wonders if this would be more of an experiment in seeing how Hammer could deal with this in the years since The Nanny and Scream of Fear.

But all the Hammer elements are there, from the opening moments with a pair of legs hanging limply from a tree while a children's choir sing a hymn, to the appearances of Peter Cushing and Ralph Bates.

For me though, there isn't enough of Peter Cushing and the whole cast look they needed one more push in the acting department to really get the script off the ground. With the Hammer Horror television series coming in the early 80s, perhaps it was best to get these sorts of movies out of the way early, and use them as a testing ground to see if these types of stories could be told.

That's not to say that this is a bad movie, far from it, I enjoyed it a great deal. It's suspenseful and haunting, particularly the ending with Ralph Bates ending up hanging from a tree. And Cushing is brilliant, as is Joan Collins as the evil Molly. But it is Judy Geeson who deserves a lot of the praise here, whose innocent portrayal of Peggy quickly turns to wide-eyed terror as the movie progresses.

While some of the acting here might seem a bit dated, its worth remembering that did come out in the early seventies and some aspects of it might not age as well. But if you're looking for a Hammer Horror movie to stick on in an evening, you could far worse than Fear in the Night.