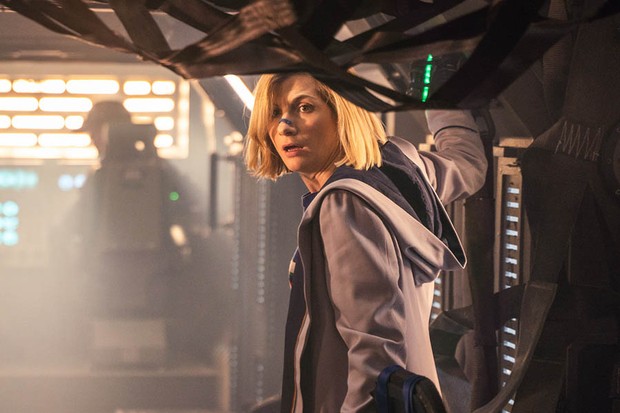 In the beginning Orphan 55 had all the outlines of being a brilliant episode of Doctor Who. We've got an interesting mystery, brilliant looking aliens, quirky supporting characters and a big social message. It is very unfortunate then that all of these pieces never come together properly and at its best, Orphan 55 feels like the outline for a greater adventure and at its worst, comes across as a paint-by-numbers 'base under siege' episode and you only have to look at the Patrick Troughton era to see how those types of stories can be absolute classics. What made it worse though was that Spyfall was such a promising start to the new series and to be followed on by with Orphan 55, threatened to propel the show back into the somewhat lacklustre storytelling from the previous series.

The first of the problems begin in how the opening is handled and it wastes no time in propelling the characters into the action. Almost as soon as the TARDIS team get to the pleasantly named, Tranquillity Spa, the action begins and the monsters start to invade. The problem with this is that we've had no time to get to know any of these characters or their stories so we don't care when they get picked off one by one. Ryan gets a deadly disease called the Hopper Virus, something that is used to comedic effect but I'm not sure that actor, Tosin Cole is quite up to the sort of comedy that this script called for. And it isn't long before the TARDIS team discover that Tranquillity Spa is more a fake-cation and is almost all a hologram on the planet Orphan 55, a world so dead that nothing can live there. Then the defence shields fail and the monstrous Dregs begin their rampage.

This is a story that is full of ideas, the biggest of which is that this is actually Earth, but one that has been so ravaged by mankind they've destroyed it beyond repair. The Dregs are the mutated remains of humanity and the higher classes abandoned Earth and washed their hands of their home world. In a post Planet of the Apes world, it isn't the biggest twist to ever be delivered but the episode was clever not to leave the reveal until the very end. Instead the twist comes half-way through when Graham, Ryan and Yaz see a sign written in Russian in an abandoned tunnel. At first, I thought this was going to be Ravalox, the Earth millions of years in the future, moved away from own galaxy in the machinations of the Valeyard in The Trial of a Time Lord. It wasn't however but I do have to wonder if the creators missed a trick there. 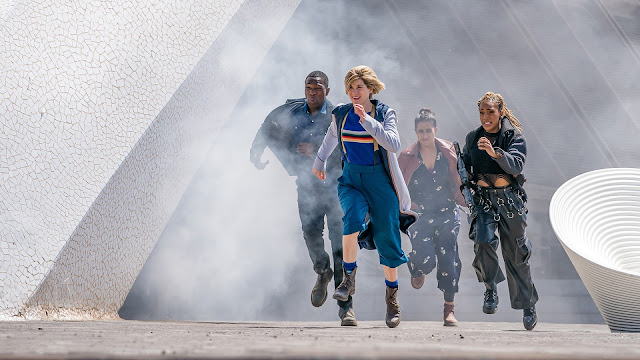 It is very unfortunate then that Orphan 55 is just so overstuffed that none of the twists, and those that are supposed to bigger than others, really land. For example, one scene sees Yaz asking the Doctor how the Dregs managed to invade the Earth however, the next time we see them, she knows that they are the mutated remains of mankind, without ever having had seen that scene. So really, what should have been one of the more emotional points of the episode, doesn't really serve more than a useless plot-point.

What does feel like the worse move though is that the story keeps shifting the attention from an exciting plot, to the less than exciting guest cast, who, as I mentioned above, don't get enough screen time for us to feel anything when they do make the ultimate sacrifice. You've got the Doctor Who version of the Red-Shirts from Star Trek with Vorm and Hyph3n who just looked like a Comic Con Furry had walked onto the set and refused to leave. There is the doomed elderly couple Vilma and Benni, who have now become a meme online, "BENNI!" A father/son duo with James Buckley's Nevi and Sylas. And then we've got the base leader, Kane, no relation of Kane from Dragonfire, and her daughter, though we don't know it until the end, Bella.

It's Kane and Bella who suffer the most here though, because they have a lot of unused potential from author Ed Hime. Bella actually turns out to be a terrorist who is trying to destroy her mother's legacy and while there is a great story there somewhere, Hime never does anything with it. I didn't mind the love-interest between Bella and Ryan, though it does happen very quickly, but Ryan hasn't been annoying me as much this series so a little more development on that front isn't something I disagree with. Kane never comes out of the untrusting leader stereotype that she is. From the off she doesn't trust the Doctor, understandably, but as things really pop off, she is still trying to kill the Doctor, despite the Doctor being the only person who is trying to stop the Dregs. 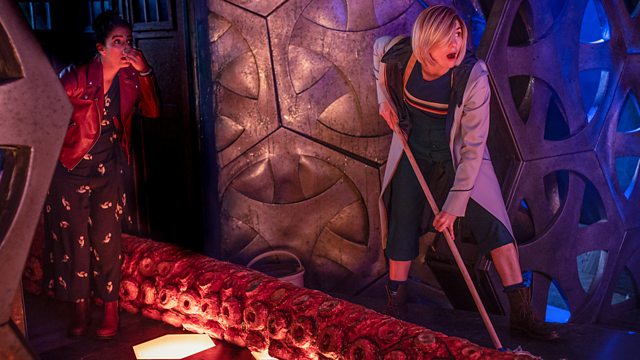 Though the last Ed Hime's outing, It Takes You Away, wasn't a favourite of mine either, it was certainly original and I can respect it for that. Orphan 55 felt like it had been great at some point, but some the dodgy editing problems I noticed throughout the runtime seem to have destroyed what could have been a cracking adventure. There are few moments where the Dregs seem really stupid, then really clever and Kane manages to escape their clutches twice, despite having seemingly been killed by them. While these could just be something wrong with the script, I highly doubt that Chibnall would have left it like this. I wouldn't be too surprised if we later come out with an extended edit of Orphan 55, something akin to the re-released Ghost Light, which features a lot previously unseen footage actually making the story more understandable.

But all of this isn't to say that there weren't a few things that did work well. Having the action pop off just as the Doctor and friends arrive is a great and exciting way to kick things off and while it was odd in the beginning, having the episode begin with what would originally have been the final act of the episode was a fun way to watch things unfold. And this episode seems to nicely convey that the TARDIS team are travelling from one place to another without the closure they crave from each episode. This is especially evident when Graham comforts Ryan telling him that Bella will be fine when she's with Kane despite none of them knowing this to be entirely true.

And the final big speech is an important one to listen too, even if it shouldn't have been tacked on at the end and actually explored during the episode. The Doctor's comment about humanity worrying about the washing while the house burns down around them has never been more important, though there have been many stories which have told us the same sort of thing better.

I think that the worst thing about Orphan 55 is that there was so much potential left untapped. There are so many plot threads that should have been tied together that are left hanging or never really mentioned through the runtime. And there is an untapped episode of how the Dregs and humans could help each other, as they depend on Oxygen while the Dregs don't need it. But it all is left untouched.

On the whole though, I wouldn't say this episode was weaker than The Battle of Ranskor Av Kolos, the finale for the previous series. It just feels very annoying at the second series of Chibnall's era is still willing to make some of the same mistakes, despite him having learnt from them with Spyfall. Still, it left me excited to see Nikola Tesla turn up in the next episode. But lets just hope that someone begins to learn from these mistakes soon.