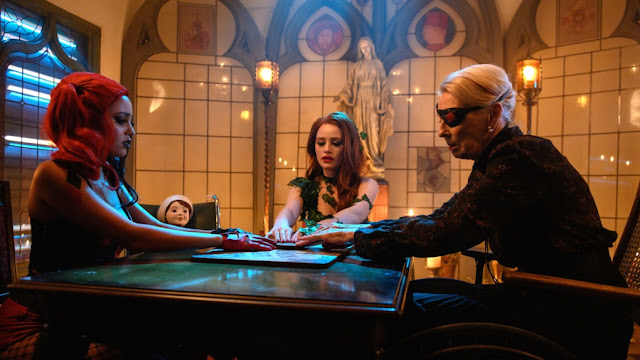 There is nothing quite like it when Riverdale embraces its own silliness. And that's exactly what Halloween does as we get two new mysteries here. One concerns the video-tapes which have begun to turn up at the homes of residents and the other is whatever is going on with Cheryl and her possession of her dead brother's body. We also set up Dodger and Bret as this seemingly this seasons big bad's and learn that Betty's half-brother Charles has her under surveillance. But what I enjoyed most here was the subplot where Veronica finds herself under threat from an escaped serial killer.

In fact, Halloween was a cracking episode for horror-fans with references thrown around left-right-and-centre. From nods to Friday the 13th and Scream, much of this episode took its inspiration from John Carpenter's Halloween. From the font they used at the beginning to much of Betty's storyline to the escaped prisoner plot for Veronica.

Lets look at Cheryl and Toni's plot first though. Despite Toni forcing her to concede, Cheryl doesn't want to be parted from her brother and so plants a creepy doll around the house to frighten her girlfriend. Nana Rose though, is old and believes the doll to be possessed by the spirit of Cheryl's other brother as she believes the doll to look like him. 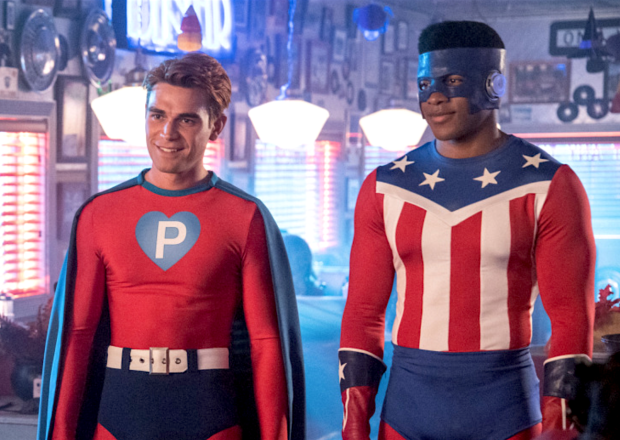 Taking some hints from The Boy, I found the doll to be quite unsettling with its porcelain face and little sailor suit, one wonders how much of Vanessa Morgan's WTF acting was actually acting. And while the Julian plot line is a little bit silly, its quite a fun little gothic side-adventure.

While Veronica's plotline did seem to be shoehorned in to give her something else to do rather than battling her parents seeing her square off against The Family Man was brilliant. One does wonder whether Alice Cooper is the only reporter in town but her news report did give us an enjoyable nod to Scream and her takedown of him was just as over-the-top as it was fun. At least this time there wasn't a musical interlude!

And then there was Betty who was receiving strange phone calls, which seem to be coming from inside her house. Not just that she seems to be answering the door to trick-or-treater's dressed up as the Gargogle King and Black Hood. It was perhaps the weakest of the many plots this episode but it was nice for there to be some references to Halloween!

Overall this episode has been my favourite of the season so far. It was fun, dark and the right amount of cheesy. But it does make you worry about Archie. He seems to be suiting up to become a vigilante again, but we've seen him do that once before. At least this time he seems to be doing it under the guise of superheroism. I'm still not sure I want to see it again though.