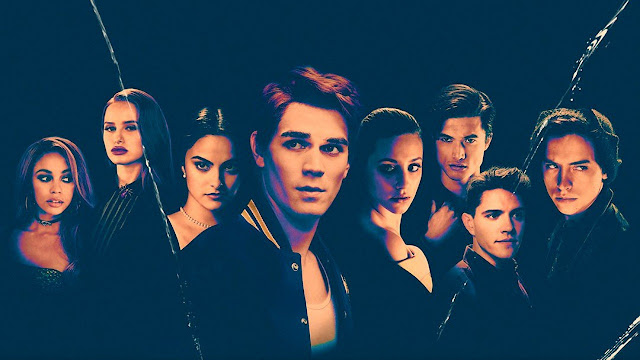 It's not even ten-minutes into this episode when Mad Dog puts his finger on what is perhaps the biggest problem with Riverdale and in one line, he encapsulates what has plagued the show since its conception. "After everything I've lived through, I don't think going back to text books and cafeteria drama is really my scene."

Over the last three seasons we've seen knife wielding serial killers, criminal masterminds, gangsters, cults, organ harvesters and murderous role-playing games rock the world of Riverdale. And I think its fair to say that why would we find scenes of American Football as interesting as Archie Andrews on the run from his girlfriend's kingpin of a father and getting attacked by a bear? Riverdale has always had two storylines, the one where the characters are at school and the crazy side and neither one really blend well together.

However, this is Riverdale and by the end of the episode, we are reminded that at some point Jughead will go missing and life in the town will return to his chaotic normalcy. We've still got Betty's mum undercover in a cult, Cheryl talking to her dead brother's body and Veronica holding a silly press-conference about her father cut in with a scene where she is singing a song from Chicago for no real reason. Why would we be interested in the school aspect of the show?

Jughead gives us a narration opening explaining that following the previous episode that dealt with the death of main cast-member Luke Perry, the summer holiday was spent looking after Archie. But now in the fourth series, the cast are in their senior year at school. But the school has changed, Principle Weatherbee has left and there is a new School-Head in charge. Colleges have to be applied too and dances are to be held.

The new principle, Mr. Honey is shown to us as a villain, cancelling the back-to-school dance that Cheryl and Toni were planning telling them that at the last dance, fellow students got murdered. And despite him have a good grasp of the hellish locale that Riverdale inhabits, he is shown as the villain to Cheryl's wunderkid persona.

And we're also introduced to Sam Witwer's new character, that guy is in everything! He runs a rival school that is interested in Jughead joining. Of course there is no way that they are as wholesome as they appear and no doubt have something to do with Jughead going missing later on. And with Jughead heading away to indulge in his intellectual pursuits, including a book club where he can talk about Moby-Dick till his hearts content, this gives Betty sometime to try and find her mother at the farm. To do that she goes to Kevin when she finds out he has still been talking to Fangs who is still at the farm.

Even stranger is her brother, Charles' response and only in the world of Riverdale would an FBI agent have no real idea what they are supposed to be doing and leave the main bulk of the investigation to a high-schooler.

But for me, the main problem with this episode was the storyline that concerned Reggie and his abusive father, an element that was set up in the previous series, but it doesn't really hit home as hard as its supposed too. Especially as its seemingly over as quickly as it was introduced to us. Somewhere in this series there seems to be a thread of children having to pay for the sins of their parents, look at Veronica and Hiram, but somehow none of that vibe comes across on screen. Not paying enough attention to such a serious subject like that is a dangerous and treating it like this is something that Riverdale shouldn't do.

However, with this only being the second episode in what so far, promises to be quite a decent outing, one can forgive it a little for being a clunky wheel-spinner. But I can't help shake the feeling that this could have been so much more.