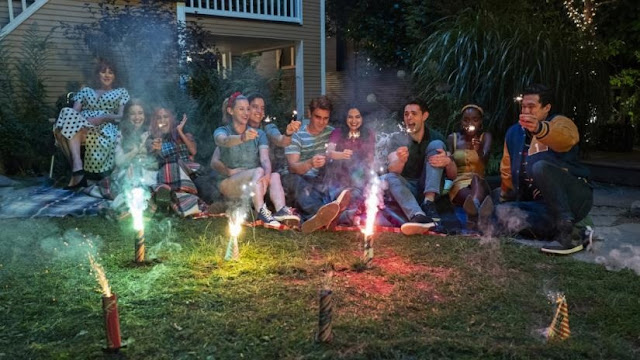 It was half-way through filming the previous season of Riverdale that fans were shocked to learn of the sudden passing of actor Luke Perry. And with the passing of any actor in a television series that is still on air, there is no easy way of addressing it. So rightly, the producers continued to tell the story of the Gargoyle King and Griffins and Gargoyles and left it till the premier of the fourth season to give us an episode to say goodbye to Archie's dad, played by Luke Perry.

Season four opens with things having gone relatively back to normal in Riverdale, with the Farm gone as well as the G&G mania and only Cheryl who is acting in typical Riverdalian fashion is still holding onto the stolen corpse of her dead twin. As the core four characters prepare to move into their final year at high-school, they plan to have a summer packed with fun as they are all aware that the freedom of youth has passed them by in recent times and they'll soon all be at college. But in a single phone call, Archie is finally thrust into adulthood. Archie's father Fred pulled over to help a driver with a flat tire and was then caught in a hit-and-run accident. And in that moment, one driver changes the life of Archie and the whole of Riverdale.

In many ways this was a straight forward episode of Riverdale. It's bare-bones plot helped to push the episode forward here with Archie, Veronica, Betty and Jughead going to collect Fred's body and bring him home. But don't let the lack of plot stop you from enjoying this episode as there is a lot of heart here as the creators and stars pay tribute to their fallen co-star and Perry's lasting legacy, not just on shows like Riverdale but also in things like Beverly Hills 90210 with Shannen Dohery guest staring here as the driver Fred saved from the accident. I'll always remember Perry though as Dana Delany's eventual love-interest in Body of Proof.

We get a slight plot divergence when Archie goes to get revenge on the man who killed his father only to discover it was the man's son and he is so much like Archie that Archie can't help but forgive him. And while we've seen this side of Archie many times before, it was nice to see the potential consequences of his actions played out in the form of the child. He could have killed someone whenever he drove without a license. But's Fred's legacy will now live on through Archie and that will hopefully push Archie into becoming something else and that gives the show plenty of new possibilities.

There is no good way to take a memorial episode but In Memoriam did it with plenty of poise and grace and it was a very respectful tribute to the late actor. While the madness of Riverdale will return next week, for now though we got a quiet moment to collect ourselves before the chaos descends yet again!