Doctor Who: Minuet in Hell - Review 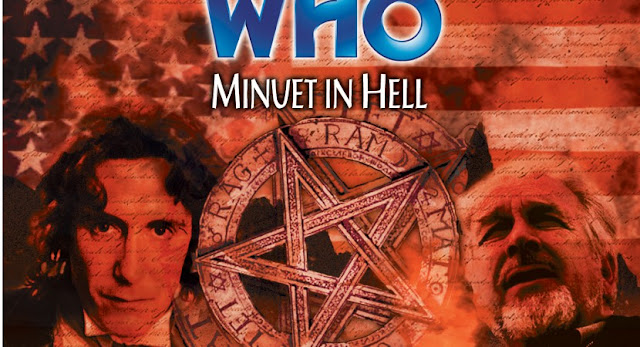 One of the earliest releases in the Eighth Doctor range was also its first dud and not even the late/great Nicholas Courtney can save it. The titular 'hell' in this script, is a fictitious proto-state in the USA, a state full of phoney accents!

For much of Minuet in Hell, Charley has been abducted and forced into slavery in a modern-day Hellfire Club, while the Doctor is an amnesiac locked up in a mental-institution. That also appears to be a perfectly plausible place for a televangelist to kick start his new campaign. And the Brig is on hand because he is spying on someone who 'brought' a mind-control machine online, as one could only do in 2001! And there are some handy demons and demon-hunters on hand to round out the cast.

And then, to add insult to injury, the Doctor's mind has been swapped with that of a journalist, just to give Nick Briggs a chance to play the Doctor once again.

Now while the Hellfire Club might be a good setting for a X-Men comic or an episode of The Avengers, but if this audio proves anything, it is that it is a terrible place to set something without it all coming across far too sleazy. Everything is just far too exaggerated with over-patriotic characters, bible thumping, corrupt politicians, and it is all so bad, it makes this hard to listen too. And on top of the OTT accents, there are a few of the actors who are unusually bad and fail to deliver emotion properly.

And the really sad thing is that this play could have been excellent. As with several of the earliest Big Finish releases, this was a loose adaptation of a fan-audio where Briggs played the Doctor. The original audio however was set in England, 1762 and didn't feature any of the annoying caricatures.

While Briggs and Courtney put in some great performances, Courtney in particular delivers some hilarious lines, they can't save the rest of the play and that is a great shame because aside from one Unbound release, this is the last time that Courtney played the Brig in Who properly.