Doctor Who: The Holy Terror - Review 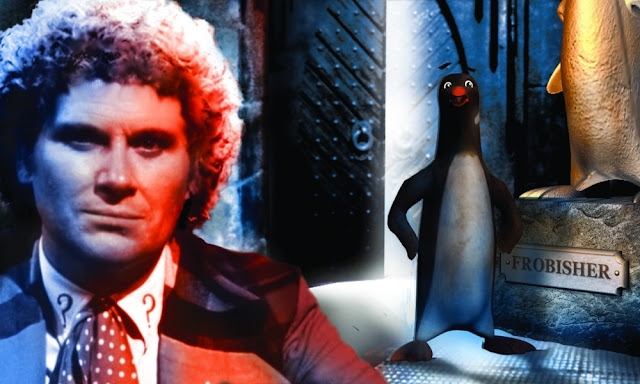 Eugene Tacitus, an aged court-scribe, has just been hauled out of bed and asked who he worships. The answer he gives is the Living God, Peppin the Sixth but that's the wrong one, because Peppin the Sixth is no longer living, having died in his bath. Eugene corrects his mistake and says he now worships Peppin the Seventh. He then proceeds to sign on the dotted line and then wanders off to carry on living.

It is this sort of strange humour that floods this script, turning what shouldn't be a rather dark story into something slightly farcical, with each new regime being exactly the same as the previous one. The old god dies and the new king or queen take their place until they die and the cycle gets repeated over-and-over-again. And no matter how hard they try, the commoners always seem to be dying. But that is the way of this world and the inhabitants are bored of it all.

But then a Blue Box arrives to take them out of their rut and along comes the Sixth Doctor and Frobisher, his penguin-shaped companion from the pages of Doctor Who Magazine's comic-strip.

The presence of something new allows the characters to break away from what they have become used too. Peppin decides he is too terrified to become king and god and this doesn't suit his new queen, who snaps completely. But everyone else has already found their new god-king. A small talking bird called Frobisher.

The Holy Terror shows Big Finish's early days at its absolute best. Not only is it funny, but its also disturbing, dark, scary and the plot is constantly shifting and incorporating things that would never work on television. And it is another successful example of why gothic horror and Doctor Who blend so tremendously well together. If are planning or wondering where to start with Who at Big Finish, then The Holy Terror is still a great place to start.