Doctor Who: The Memory Bank and Other Stories - Review 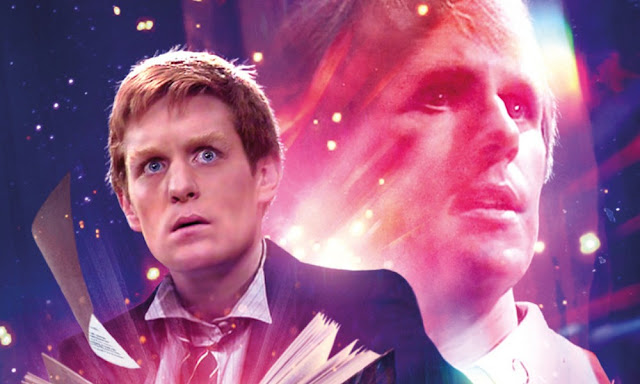 The Memory Bank and Other Stories is quite an interesting set of adventures, it starts with Turlough trying his hand at one of his hobbies, art, previously seen when he tried to sketch some scenes from The Eye of Orion in The Five Doctors. But if anything from that television serial means anything to this audio, it is the Fifth Doctor's line about a man being the sum of his memories. And every story here is about memories, either our own or someone else's and what we choose to remember. And like all of Big Finish's other anthology releases, this one is another that has a 'better-than-the-sum-of-its-parts- feel to it. Each story works perfectly well on its own but works brilliantly when you can hear all of them in conjunction.

The opening story, The Memory Bank, written by Chris Chapman does what many great Who adventures does and takes something metaphorical and makes it literal, in this case, the idea of being forgotten can kill you and the Doctor and Turlough have landed on a planet where this is true. Of course in traditional fashion, there is some malign force, but the story's strengths come from its human-factor. We've got the old Archivist's memories, Turlough's reluctance at being the new one, the Doctor literally bringing someone back by remembering them and some snippets of Turlough having to deal with his past. It isn't an idea that would sustain a whole 120 minutes, but it does a cracking 30.

If you were to talk about literature and science and its importance, you are more likely to meet more scientists in fiction than you are in real life. These stories then become a way of life and then mould us when we go into the wild, though real scientists must find it irritating when people's ideas of their jobs come from books! Paul Margs gives us The Last Fairy Tale, and he takes that concept and transports us to Medieval times, where the Doctor's arrival becomes misunderstood and he becomes a fabled storyteller. But what if the Witches and Ogres of fiction object to the way they are represented? While that might seem like a thin-plot, it works really well. Margs is quite a comical storyteller and this is a story that never outstays its welcome.

Eddie Robson gives us the offbeat third adventure, Repeat Offender, and like his previous story The Jupiter Conjunction he kicks things off with a deconstruction of a classic Who trope, this time with the Doctor put under arrest, because it simply seems like he committed a crime. But Robson manages to sin something great out of it, giving us a complex and interesting mystery that takes place in one room and scene. Robson has always done a terrific job with the Fifth Doctor and this story is no different. Overall, this is one of the strongest entries in this set.

Bringing the set to a close, is Ian Potter's' The Becoming where the Doctor and Turlough arrive on a planet in the middle of an coming-of-age ritual. But what happens when your personal-memories begin to change the memories of your ancestors. The story is certainly more sci-fi than Doctor Who gets at times, with a unique world having been worked out with rather small stakes. Will this one individual survive her planet? I quite liked this one for that.

Listening to Terrance Dicks on the commentary for The Five Doctors, he admits he had no idea what he meant about a man being the sum of his memories when he wrote that line. But I think I can understand it. People aren't real, you're made up from memories and while you won't die if you are forgotten, the Doctor certainly will. While there are some things we would like to forget, they have shaped us into the people we are today. And as long as Big Finish continue making stories like this, the Doctor will never be forgotten...