Doctor Who: A Matter of Life and Death - Review 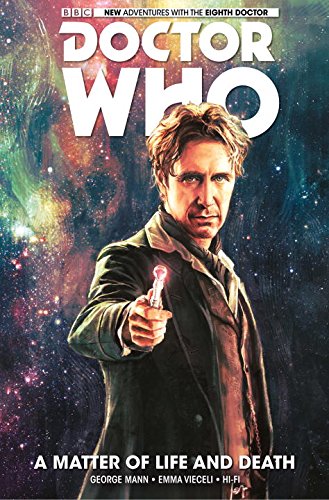 A Matter of Life and Death is a five-issue mini-series for the Eighth Doctor all interconnected with a nice little story concerning the Doctor's latest companion Josie Day.

I liked the meeting of the Doctor and Josie when he returns to his strange country house only to find her basically squatting there as she tries to make a living for herself with her paintings. But as soon as the Doctor arrives, things begin to spiral out of control and Josie's paintings of Ice Warriors, Cybermen and other alien baddies come to life. The Doctor learns that Josie is covered with animae particles which somehow triggered his arrival on Earth and his meeting of Josie.

The first issue comes to a fairly easy conclusion but it leads into four more adventures until it all comes to ahead when they arrive on a spaceship far in the future. People on the spaceship are producing new bodies for the 00000.1% who can afford to live forever. Their brains and memories are pulled from their dying bodies and implanted into new ones.

Now, I won't spoil the rest of this book for you but author, George Mann manages to do something for Josie which Stephen Moffat never managed to do for Clara. He gave us a nice wrapping up of Josie's storyline and still managed to find a way of keeping her around in the Doctor's life. Of course, the theme that crossed over all the issues is what made this book fun to read.

The artistic landscapes from Emma Vieceli are beautiful to look at and HI FI give them some truly vibrant colours to accompany them.

I have heard many of Mann's audiodrama's for Big Finish but I have never read something which gives such a life to the Eighth Doctor, normally writers just rely on Paul McGann's excellent performance. Not here, Mann captures McGann's performance brilliantly and I could hear McGann delivering every line. Not easy for a Doctor who has only really appeared in the audio format...