Doctor Who: The Last - Review 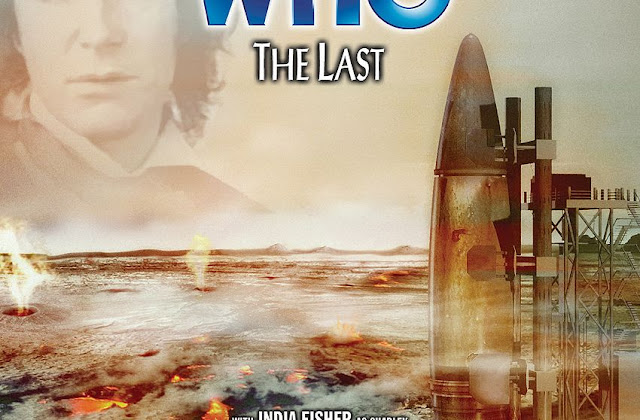 Following on from the lighter material in Faith Stealer, the Eighth Doctor, Charley and C'Rizz are thrown into The Last and if the title doesn't give anything away about how bleak the story will be, then the cover for the piece should do. Its a desolate wasteland with nothing but a single rocket in sight. For once, the cover actually gives us a decent idea of how the story will pan out.

In many ways, it is a story that takes a great deal of risks, pushing the Doctor and his friends into situations they have never been in before. And for once, there is little that they can actually do for the people they come across.

When the story starts and the gang come out of the Interzone and into this new world, most of the planet's population is already dead. And it becomes clear quite quickly that the war has happened quick, fast and in a hurry. The planet is so damaged that it is slowly coming apart and there are not many people left to save. And it feels very refreshing to thrown into a situation in Doctor Who were there is literally no hope.

While I stated above that this story dares to take risks, on the other hand it doesn't really take any risks at all. Its not the finale for this little series of Eighth Doctor stories, so nothing that happens here is going to be permanent, even if it does put our heroes through the wringer. You know by the end, they'll all be fine but that is something made clear from the off.

But that certainly doesn't make The Last a bad story to listen too. Much of the fun to be had here is in finding out how our characters are going to be fine in the end and while the answers might not be all that satisfying, they are certainly interesting.

Running for almost 2-and-a-half-hours, The Last is certainly a long story, but the plot keeps moving along at quite a pace. We get a lot going for the Doctor and C'Rizz particularly when they spend much of the story separated. And it is a nice little character piece for C'Rizz allowing us to learn more about his past, faith and religion.

For the Doctor, he is faced with some tough decisions and choices to be made. He has lived a long life and he rarely faces the possibly of terrible things happening to his companions. And he very rarely has to face the idea that bad things have happened to them while he's been out of the picture. But this story explores both of those possibilities and shows us how far the Doctor is willing to go to keep himself alive.

On a re-listen you might also pick up on things you'd missed the first time around, particularly how much foreshadowing goes on here. We've got themes of faith, life and rebirth, all things that will come into play later on down the line and it makes it well worth going back and listening to the divergent arc.

Overall though, The Last is a pretty serviceable story, not bad by any means, but not terrible. There is a lot of things to enjoy about it, particularly the exploration of the characters and the continuation of this particular arc...