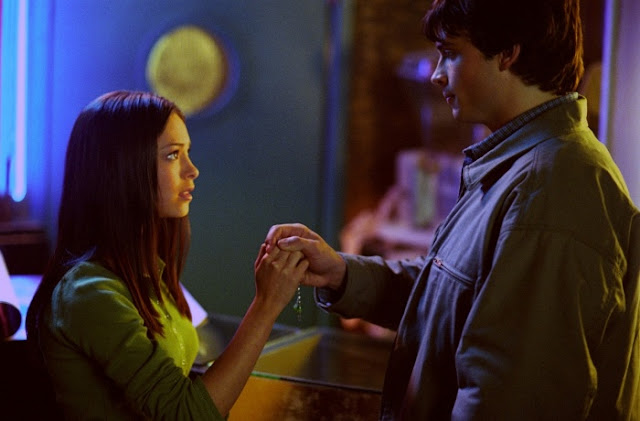 So lightning plus green-Kryptonite equals a power switch? Well, who knew? Well that's alright because I don't insist on realism in my superhero shows. And actually, this was a pretty good episode!

When Clark first becomes human he has nosebleeds and leg cramps and wonders how we all manage in our everyday lives without superpowers. But in the end, it was nice to see Clark embracing humanity, playing basketball without worrying he'll hurt someone and getting closer to Lana without having to worry about her Kryptonite-necklace. Clark adjusted and enjoyed himself. Of course a lot of this is because he has parents who love him and will always support him. Jonathan and Martha Kent love Clark, not his superpowers and Clark knows it.

It is a shame then that poor Eric doesn't have that kind of support. Drunk on the superpowers and lashing out at his horrible parents, it all turned out badly because he didn't have Clark's years of experience. But one thing I was expecting didn't happen, someone taking his parents hostage and forcing Eric to do their bidding.

It is bizarre to see Shawn Ashmore here as Eric! He had and would go on to play Bobby Drake AKA: Iceman in the famous 2000s X-Men films. Here, his full character name is Eric Summers. In the X-Men universe, X-Men leader Scott has the same surname. Where the production team trying to tell us something?! And his twin brother, Aaron Ashmore would go on to play Jimmy Olsen in the series from Season 6 to Season 8.

This episode also proved to be a good time for Clark to loose his powers because Lex had the infamous car accident analysed and became convinced that his friend possessed some kind of superpowers. And poor Victoria got what was coming to her when Lex found out that her father planned to buy out Luthor Corp. Sorry about that Victoria!