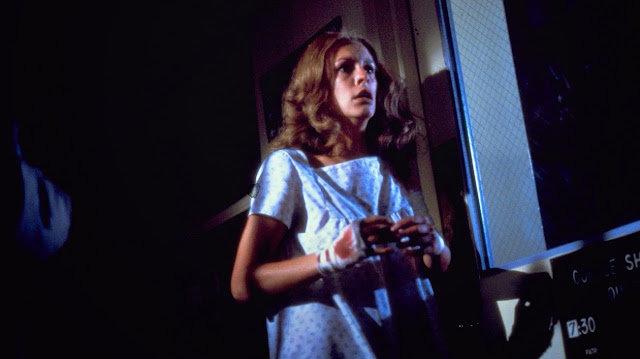 It is sad to something sink. In 1978, John Carpenter delivered the terrifying masterpiece that is Halloween, a move about a mad-killer who slowly makes his through a town on Halloween night. However, Halloween was a movie that spawned hundreds of copies and lookalikes, each one getting progressively worse.

Halloween 2 fits that description perfectly, its less of a horror flick and more of a geek show and it doesn't even pay homage to the movie that spawned it. Instead, it decides to pay homage to the various other slasher films that came out after the first Halloween. It is also a movie that doesn't have the same artistry or imagination of the first one but instead relies too heavily on the new technology. It is one of the first movies in history to show us a close up of a needle being inserted into an eyeball, something we see twice. It mortifies the viewer nicely enough but it just does what every Splatter Movie is supposed to do. There are a few moments here and there that surprise the viewer with its originality, like plunging someone into a whirlpool bath a couple of times, but on the whole it lacks the originality, timing and sheer awesomeness of the debut movie.

Halloween 2 kicks things off where the last one ended, using some of the same footage. The mysterious Michael Myers has just tried to kill Jamie Lee Curtis but Donald Pleasance has swooped in and shot him down, deciding he isn't worth trying to save. But the killer is down, not out and as the first movie ended with his body having walked away and in this one, he is on the prowl again, shuffling after screaming women at the same strange pace.

Really, Halloween 2's plot depends on the old 'Idiot' trope of everyone behaving and acting stupidly as they are slowly hunted down. I suppose that's necessary because if everyone acting sensibly they would be able to solve the mystery and the movie would be five-minutes long. So for an hour-and-a-hour, Jamie Lee Curtis and some other characters run into traps set by the killer so he can bump them off. In the first outing, Curtis locked herself in a wardrobe, this time she hides in the hospital boiler room but the movies most masterstroke moment of idiocy comes when a kid passes out on the steering wheel of the car he is hiding in, causing the horn the blare and alerting the killer to his location. And just like the killer, this film is relentless.

The whole piece could feel monotonous but being set in a hospital it gives the killer some nice new toys to play with. We've already mentioned the whirlpool bath and the needles but there is one particularly nasty moment involving an intravenous drip, shoved into someone's arm so they slowly bleed to death. Its particularly gruesome to give the film makers their credit and finally, someone does what we've been waiting for in this slasher movies, they slip and kill themselves on all the blood! It had to happen, sooner or later...