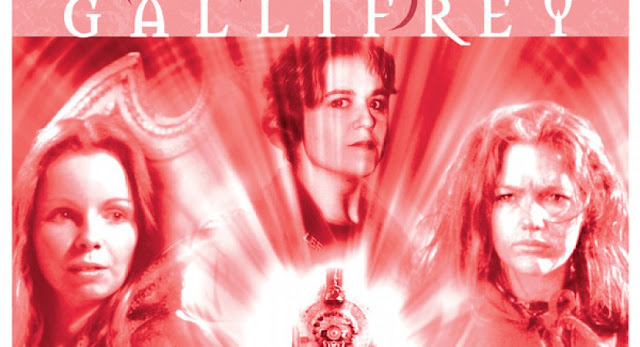 Finding herself aboard the Transcontinental Express from Munich in 1939, Romana demonstrates that she is as much the Oncoming Storm as she is the oncoming train!

The verbal sparring matches between Romana and Arkadian are so much fun to listen too, he is most certainly a scoundrel, something he doesn't try to hide and Romana does have a little respect for him and what he can do for her.

A Blind Eye also serves as a way to tie up all the loose ends left hanging from the three-previous audio adventures in this series and for a nice change of pace, the adventure doesn't take place on Gallifrey. As a result, Braxiatel, Darkal and K-9 are all absent from the proceedings, but Narvin finally comes into his own, Torvald gets some much needed development and Romana, Leela and guest character, Cecelia Pollard demonstrate how strong they can be. A Blind Eye is also a clever script with an entertaining repartee, lots of chase sequences, plots within plots and twists and turns right up to the heart-wrenching revelation at the end concerning Leela and her husband Andred. And for a first time listen, it was a satisfying conclusion and a shocking one.

And this story has a story which features a monster besides Charley's bratty sister, Cecelia, voiced nicely by India Fisher. She is very good at playing a spoilt rich brat, although the familiarity I had with Fisher's voice as Charley was quite jarring when I had to tell myself she wasn't playing the same character! It is a little strange though that Fisher's real-life sister, Francesca Hunt, who played Hannah Bartholomew alongside Peter Davison and Sarah Sutton, didn't get to play this role. But I suppose she wouldn't have been able to pull off the character quite as well. And I loved the way Leela kept on calling Cecelia out on how she isn't as brave or as good as Charley is!

Undoubtable though, it is Torvald who is the break out character of this story. His ongoing rivalry with Leela finally comes to ahead, and it might be worth listening to this audio twice, once with the knowledge of what happens at the end!

Initially, Narvin gets a little overshadowed, barking up the very-wrong tree and blaming everything on Romana. However on a re-listen, it is clear that he is much cleverer than that, I like this Narvin, I still want to punch-him-one but I like the sneakier character we get here.

Romana though, once again steals the show. Spending much of this story rolling with the punches, she looses her patience and unleashes her wrath, and it is wonderful to be reminded about how courageous she can be. And her disgust with Narvin and Torvald playing games with her is excellent to hear too. But poor Leela, having an actor of Louise Jameson's calibre having to slip into soap-opera mode is never good.

Cecelia can be a little grating but that is the whole point of the character and she makes a much better villain than the actual villain. One wonders if the second train is made out of the same material as Wonder-Woman's invisible jet as people can't seem to see it, even though they are supposed to be able too!

Even so though, this is a good wrap up for Series One of Gallifrey and it is sad to think back on these more innocent times compared to what came later...