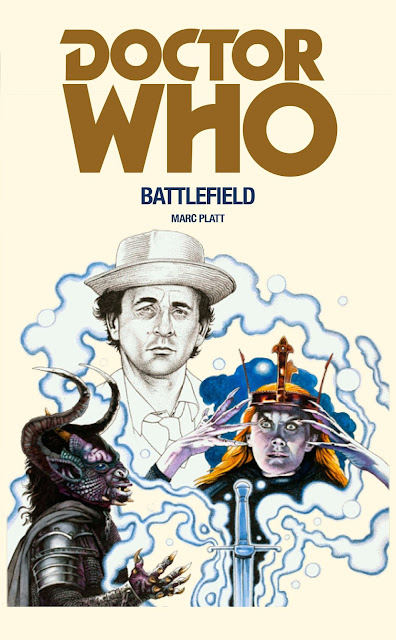 It is a story that gets some flack from fans but I really like the television counterpart of Battlefield. I always have and probably always will. There, I've said it!

It is nice that the novelisation from Marc Platt is an absolute delight too.

Perhaps the reason this book is just so good is because it really expands on the television serial and fills in some of the confusing gaps. Platt goes above and beyond in this respect and it takes to the middle of the novel for us to realise we are reading a novelisation of the television serial! The prologue is delightful and also serves the dual purpose of being an epilogue of sorts too. It presents us with a future and ginger incarnation of the Doctor attending to the dying Arthur under the guise of Merlin. It helped to set the tone for a series of - timey-wimey events that is in keeping with the modern series. In fact, this book wouldn't be out of place in the era of the New Who.

The opening chapters set a nice tone and hint at a Gallifrian influence in some of the artifacts without spelling it out fully. So much time gets spent on what came beforehand that when it comes to actual events we saw on the television, there is noticable shift in pace.

Now don't get me wrong, the change of pace manages to give the book a sense of urgency that the television serial never had, especially with the fight scenes that don't quite manage to convince.

There is also a subtle hint that this Doctor might be aiming towards the version from the Virgin New Adventures novels in his dealing with the fact that he might be Merlin and the revelations that come with this. It is something that is done in a much darker way than it was in the child-friendly Target Novelisations and it mirrors the arc where the Doctor is afraid he is going to become the Valeyard after all. It is something wonderful to read.

Really, there are only two real complaints that are to be had with this reprint. The first is that there isn't an introduction, something that came with the previous reprints and that many readers enjoyed beforehand. And the second point is how abruptly the whole thing ends. Granted the television serial did it in the same way but with the excellent build-up one wouldn't have minded having a similiar fifty-odd pages of wind-down too.

However, given these minor quibbles this novelisation is a fantastic way of exploring the full extent of the story Battlefield and the exploration of the Doctor's darker tendancies brought the New Adventures a little bit closer to home...