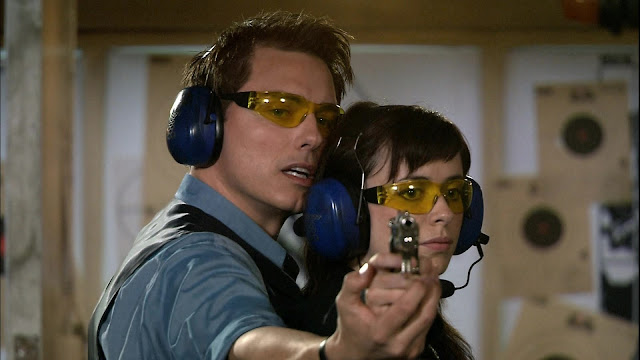 With the last episode placing a lot of its focus on the subject of sex, Ghost Machine decides to puts its attention on heavy emotion and deals with it an awful lot better than Day One does!

Perhaps the biggest thing to take away from Ghost Machine is that something can get to Owen as he couldn't let Lizzie's murder go unpunished. He shows us some genuine fury when he confronts her killer, Ed Morgan whose death/suicide by the hands of Gwen, certainly got no sympathy from me! While things are very rarely black and white, I was with Owen through this whole episode. Sorry Gwen, you know you are still my favourite member of this team!

Like the Resurrection Gauntlet in the opening episode, Ghost Machine gives us yet another machine that could be useful in solving mysteries and murders but instead, just makes everyone miserable. The big theme for this episode is that sometimes things are better left alone and that it is sometimes, better not to know. This is a theme that is used again when looking at Gwen's home life. Rhys is aware she is lying to him about things but he knows well enough when to leave things alone. Its a good guy that Gwen has there!

And then there is the scene between Gwen and Jack in the shooting range which is filled with sexual innuendo. Jack wants her and she likes him. But she does the right thing and goes home to Rhys. While many won't understand how she can resist him, I guess I can understand her actions. Talk about strong emotions and putting away dangerous things that should never be used!