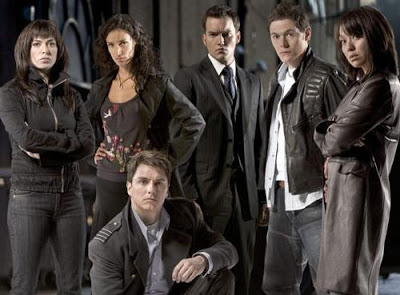 Everything Changes sees everything change for a young police constable named Gwen Cooper when her natural curiosity lands her in the right place at the right time.

Everything Changes is a really strong pilot episode for a new series, far from the best opener I've ever seen but it does everything right. While there is no TARDIS around for their adventures it had been established that there was a rift in time and space which ran through Cardiff, allowing many aliens and objects to fall through and wreck havoc on our world. Torchwood, also established in Doctor Who has changed a lot with Jack taking over the organisation and moving it to a base hidden underground. But one question that must be asked is if Torchwood is supposed to be a secret, how come the police know about it?

The Resurrection Gauntlet was an interesting plot and it made perfect sense that Suzie would go around murdering people so she could test its limits. From the off it is established that Suzie is obsessed with death and immortality but she never knew that the answer was right under her nose the whole time in the form of Captain Jack. When Rose brings Jack back to life at the end of The Parting of the Ways, it must have changed him significantly and in ways that we have only begun to explore.

The main characters are promising too, particularly Jack and Gwen who Russell T. Davies devotes a lot of this episodes' runtime too.

Jack almost comes across as too much at times. He is the sort of good looking that would have landed him in Hollywood movies back in the forties, with style and charm oozing from him. But there is a strangeness to him, something that tells him he doesn't really belong to this time and he is a law unto himself. But it is easy enough to see why the BBC would want a series based around him.

Gwen works brilliantly as the audience figure for this series. She is a good person, she cares about others, is tenacious and dedicated. But she lies to her boyfriend Rhys. Not to keep things secret from him but because she doesn't want to burden him with some of the awful things she sees in her job. She doesn't want him lying awake at night like she does. Yet she is compelled to help people and strives for law and order, even if it upsets her. She's also lovely, in a girl-next-door kind of way.

There isn't really a lot to say about the other members of the Torchwood team. Toshiko Sato takes some of the equipment home to work on it, showing us how much of a hard worker she is. And Owen just comes across as a nasty piece of work, spraying himself with an alien spray, making him irresistible to other people so he can have some meaningless sex with anyone.

And then there is poor Suzie Costello, made evil by the Resurrection Gauntlet, assuming she wasn't evil beforehand. Lanto Jones, the office boy is a cute little buttoned up character, who jokes with Jack about sexual harassment.

But the big point is that Torchwood claims the twenty-first century is when it all changes. How exactly?