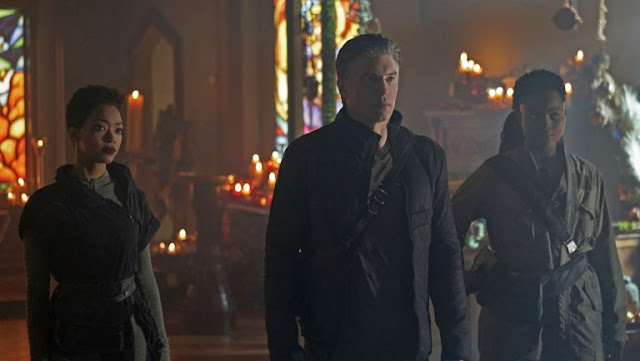 With the improvements on the production side of Discovery continuing to do some great work, New Eden, the latest episode was a little bogged down with some of its religious themes, especially as it seems to not understand the religious themes its trying to explore.

New Eden starts out in much the same vein as the previous episode, Brother with Pike and Burnham fronting a much happier crew. The much friendlier and team-orientated dynamic that Pike has brought along with him leads to each scene on the ship working fantastically well. We've also got plenty of excellent character dynamics coming along, this episode looks particularly at the one between Saru and Tilly. Though the final moments of the episode are certainly awesome to look at, one does wonder about whether that would in-fact be possible. And while it was pretty obvious that Tilly's friend wasn't real, it didn't make their interactions any less fun to watch. And the moment when Tilly figures out her friend is actually dead is an amazing scene, Mary Wiseman really helps to sell it with her expression.

Perhaps the biggest problem with this episode are the scenes set on the alien planet. I expect to explain properly when I didn't enjoy these scenes as much I'd have to explain philosophy but to shorten it down, the writers didn't really explain or explore these religious properly and why their faith is what it is. It certainly didn't portray them realistically, and it's attempts to stay above religious disagreements lead it taking a completely different side altogether.

The result makes New Eden a slightly hard watch, particularly, if you're a deeply religious person, I'm not but I can understand where someone who is would come from here. Choosing to combine every single religion in creation is a clear attempt to not pick a side as to what is greater than what and making so many sides would only create the same problems we have with religious beliefs today. Instead of pretending that we all believe in the same thing, lets all recognise where we are different but still get on with our daily lives like civilised human-beings. You can try to convince people that what you believe is right but if you aren't willing to except that some people don't have the same faith system as you then you will be in for a very difficult life. This alongside with the science-faith story trope unfortunately meant that the alien planet scene fell completely flat.

However, the execution of this episode was perfectly fine. Jonathan Frakes continues to prove why he is just a distinguished director and producer and the acting from all involved was particularly good. Sonequa Martin-Green has finally settled down into the role of Burnham and all our main cast are continuing to do a sterling job! Roll on next week.