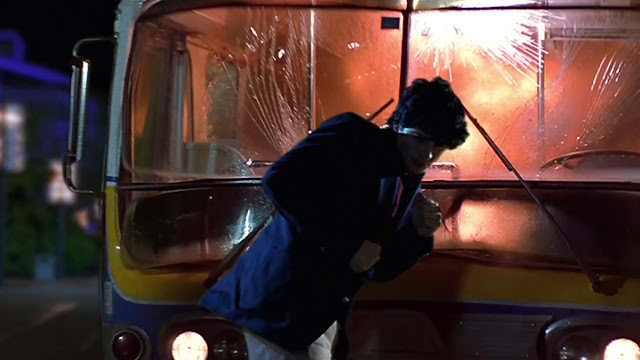 Rogue was perhaps the moment where the series changed tracks and started to really pick up. While not a great episode, it is certainly packed with some nice imagery and delved some more into the characters it concerned.

Stopping a bus crash in Metropolis on a night out, Clark is spotted by a dirty cop called Phelan who decides to use what he knows to manipulate Clark into doing his bidding. Clark then looses his temper and control and we get our first glimpses of what Clark could do if he went bad. In the end though, Phelan's plan doesn't work out and he ends up dying in a shoot-out. But this brings up one of the biggest plot holes of this episode, Phelan had no way of proving what Clark could do. The man never bothered to take a camera or anything with him on their little missions so he really had nothing on the Kent family.

Lex also features heavily here, as well as trying to help Clark and his family, we learn some little chunks of his past that will be resolved later down the road. He also gets quite close to one Victoria Hardwick, the daughter of another business tycoon who is after Luthor Corp. She is essentially another Lex Luthor, so it was quite interesting to see Lex going up against himself. This is the episode where Lex really begins to suspect there might be more to Clark than meets the eye.

Clark stopping the bus has become an iconic moment and image for Smallville fans and rightly so. Probably the biggest set piece since the meteor shower in the pilot episode, and it still stands up today. Some of the effects are quite dodgy by today's standards but for me the bus scene still holds up!

Overall another fairly decent episode, even if it didn't really do anything particularly new, it did however, see the show change tracks. Where things had once been slightly predictable, it was all going to be brand new from here on out!