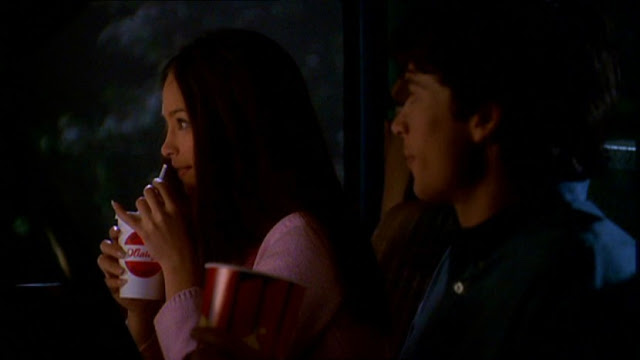 Really, when it comes down to it, Craving is just a rehash of Stephen King's novel, Thinner, with elements of V, thrown in, I'm sure, for good measure.

And what really happens here, a pre-Lois Lane Amy Adams goes on a freaky diet but ends up eating everything?! Well, she also kills and eats a deer and becomes a fat sucking vampire. And when Clark and Pete see her the next day, she is miraculously skinnier and no one puts two-and-two together?

The explosion at the end of the episode is pretty decent, luckily it looked like it was filmed far in the country so no one would be spooked by it went off with a pretty big fireball. Pretty impressive visual effects for the time.

Perhaps the reason I'm not too keen on this episode is because the writers took the serious topic of eating disorders in teenagers and made it all look a little silly.

Clark also has to stand Lana up for the second time, poor girl can't catch a break! But he makes up for having to miss her birthday party by giving her her present. Early in the episode, Lana tells Clark about her earliest and happiest memory. Clark decides to recreate that and I must admit, I've always been slightly moved by it. While I didn't like the pairing of Lana and Clark, the show didn't handle it too well, it was a strong moment for the couple before they were a couple. Once again though, Annette O'Toole was fantastic as Martha Kent, particularly in the scene where she is eavesdropping on Lana and Clark's conversation!

At least the writers handled something correctly in this episode...