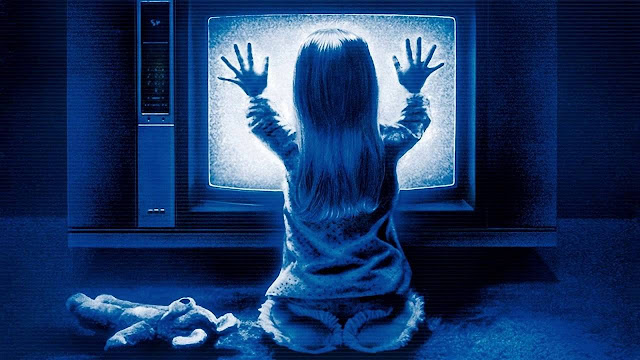 Over the decades special effects have grown so much. They are now so skilled and professional that they sometimes upstage the human actors, like Avengers: Infinity War - as good as that movie was. And they often cost a considerable amount of money but that is alright in Poltergeist as the movie is made up of fairly unknown actors because the real stars are the producer,  Steven Spielburg and director, Tobe Hooper who was famous for The Texas Chainsaw Massacre. The pair have a reputation for realistic effects and violence and their names attached to this movie suggest its technology will be impecable.

Basically, this is the movie that The Amittyville Horror dreamed of being and it starts off with many of the same ingredients, a happy family in a nice home. It also features some of the same portents of doom, items move by themselves and the weather around the house is different to everywhere else. And it ends in the same kind of apocalyptic mess with spirits taking total control of the house.

But Poltergeist also works as a very effective thriller, not because of the special effects but because Hooper and Spielburg take care to show us the strange events through the eyes of the family, instead of sitting back and letting the effects dazzle the viewers. The movie also takes place around the favourite setting of Spielburg, the suburban home, much like Jaws, E.T. and Close Encounters. While the household house might not have seven gables it does have a double garage and is occupied by a fairly normal family, two parents and three kids and the movie is quick to start off on a hopeful note with The Star-Spangled Banner theme as the television signs off, like they used to in the old-days.

If you really look at the opening visuals though, there is some forshadowing to what will happen. With such a extreme close-up on the television screen, you wonder if you are being invited to look past the pixels and see something else. The youngest daughter certainly does when she starts having conversations with an entity inside the box. She is in touch with the TV People. It isn't long before she disapears from this plane of reality altogether and goes to live with the TV People, whoever they might be. Strange things start to happen at this time too, an old tree begins to behave strangely, toy clowns come to life and the swimming pool has a mind of its own. The villains are also familiar in the form of real-estate developers, like they were in Jaws. People who will get anything done for cheap. This time however, instead of encourging people to go back into the water, they have build the estate on top of an old graveyard.

While all of this seems completely ridiculous, Hooper and Spielburg hold our interest because the family feels so real and the events that take place seem to have some form of credibility as a result. That all just takes place in the first hour of the movie, then things really take a turn for the stranger as all-hell breaks loose and things begin to operate on the same plane as Alien or Altered States, with some surprising special effects and light shows. There's a closet which seems to exist in another dimension and the swimming pool suddently fills up with skeletons desperately trying to get out. The family's search for their missing daughter leads them to an expert in the paranormal and a lady who claims she can clean houses of ghosts and demons.

Perhaps the most surprising element of this movie is that no one ever decides onscreen whether it was really a poltergiest haunting the house or something even worse. But I suppose if the creators weren't to bothered about calling it Poltergeist, then we shouldn't be either...