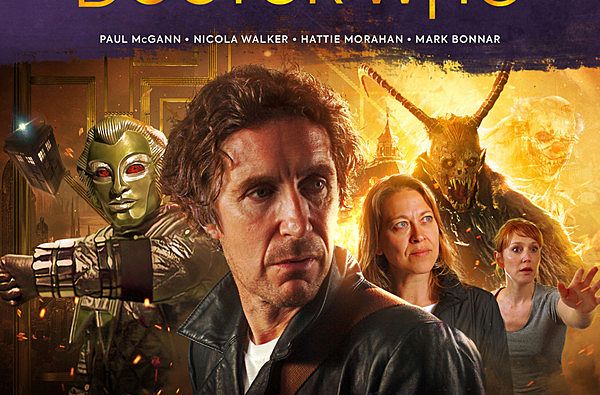 Having rescued both his companions from the Eleven at the end of the previous set, The Doctor decides to try and raise their spirits by taking them on adventures to their homeworlds. Ravenous Volume 2 seems to have both Halloween and Christmas sorted out with its assortment of stories on offer. In fact, the Christmas two parter here might be a tradition to listen too, alongside The Chimes of Midnight as I really enjoyed it and thought the characters were very nicely written.

The four disc set opens with Escape from Kaldor, which sees Liv back on her homeworld of Kaldor and the return of some robots of death. The story from Matt Fitton is beautifully written, which mixes the robots from Tom Baker's popular outing with messages on class and race values. And it also takes the time to explore what a society would become if everything went over to automation.

Fitton sees to it that as well as taking Liv Chenka back to her world, he also gives her an awkward re-union with her estranged sister. He further complicates matters by having Tula work for the corporate organisation that controls the robots and that leads to some interesting looks at how family works.

The second and third stories, Better Watch Out and The Fairy Tale of Salzburg, written by John Dorney are the stand out releases from this set and they manage to outdo all of the television Christmas episodes without even breaking a sweat.

The opening episode sees the Doctor, Liv and Helen visiting the beautiful city of Salzburg to enjoy the festivities that are unfolding there. But they soon discover that not everyone is in a celebratory mood. The Doctor soon encounters a miserable landlord who is trying to evict a family at Christmas and he feels compelled to intervene in his actions. In true Doctor Who fashion though, things quickly take a dark turn when the Krampus turns up to wreak havoc on the city and everyone in it.

Fairytale in Salzburg sees Dorney completing the story and has Helen and Liv taking centre stage in the action. It soon becomes clear that they need a certain 4th century priest to help.

The story from Dorney is a really clever one, that not only makes us care about the characters but it also uses time travel and legend of Christmas in a way we haven't really heard before.

The final story, Seizure from Guy Adams sees the Doctor and the gang on the trail of a distress call. It is a mission which might have some dire consequencies for the Doctor when he tries to rescue the Eleven from a dying TARDIS.

The set up for this story and the next boxset is incredibly effective with Mark Bonnar as versitale as ever in his performance of the Eleven. And the notion of a monster that will eat people, but especially Time Lords, is one that is incredibly interesting.

It also ends on a great cliffhanger that rightly leaves us wanting more.

Overall, Ravenous Volume Two is a vast improvement over the opening set and balances light and dark stories brilliantly. With some great writing and acting, it a set well worth checking out...