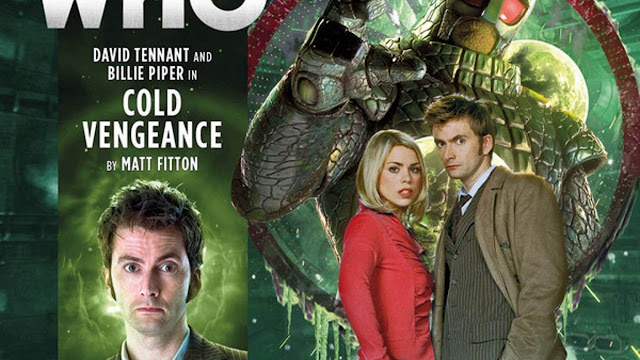 It is odd to think that the Tenth  Doctor never encountered the Ice Warriors on television. Perhaps that was due to his future visit to Mars at the end of his era. But it always felt like there could be some sort of connection with the pair in spirit. But when it actually happens, sadly, it is isn't the case.

Cold Vengeance allows the listeners to plug this continuity gap until their hearts are content with the Tenth Doctor and Rose facing off against the Martins in all their war-like glory.

From the story's opening moments, you'd be forgiven for wondering if you're listening to a remake of Dragonfire with its frozen shopping centre location, pirates and villians who survive in the extreme cold temperatures. But if you stick with this one, you'll find it is a sold and entertaining entry into the Tenth Doctor era.

As it seems to be the case with the poor Ice Warriors, Lord Hasskar and his group have been in a long, deep, sleep before the ice melts. They are awaken by some careless humans who have no one to blame but themselves for what is now happening.

The fallout for this tale is revenge concocted by Hasskar who will exact his vengeance on the humans who he was at war with 500 years ago, (I guess some people just can't let go!) What follows is an entertaining and nostalgic trip back into the early days of 10/Rose. It works as a nice tribute to that time because, while it doesn't slot into the larger arc from that era, it works as a nice adventure for them with the same energy as the show at that time. While some might call that an obvious remark, it is important to remember for pieces of this nature.

But all that is a mere side-note as the Tenth Doctor and the Ice Warriors work nicely together on the audio format. Once again, David Tennant makes us wonder whether he ever really left the role in 2010 as he flies, teeth first into the material and it is a story that makes the Tenth Doctor as alive as he ever was. And it is always a delight to see him come up against classic villians who he never met onscreen.

Billie Piper is also back as Rose Tyler and to place her in a rough continuity, this story seems to take place after Rise of the Cybermen/The Age of Steel, which means that she is pretty much baggage free and ready to embrace the fun. It is clear that Rose has never really left Billie and Billie has never really left Rose. One minor quibble though is that she seems to have her real life voice rather than her accent from the series. This means that she ends up sounding like she did in The Day of the Doctor but it doesn't take away too much from the Rose we all know. It just takes a little while to really get into it.

Overall, Cold Vengeance is an excellent entry into the world of the Tenth Doctor. Really though, it works as a nostalgic trip back to 2006 on Saturday teatimes. And the Ice Warriors are just another piece of icing on this delicious cake...