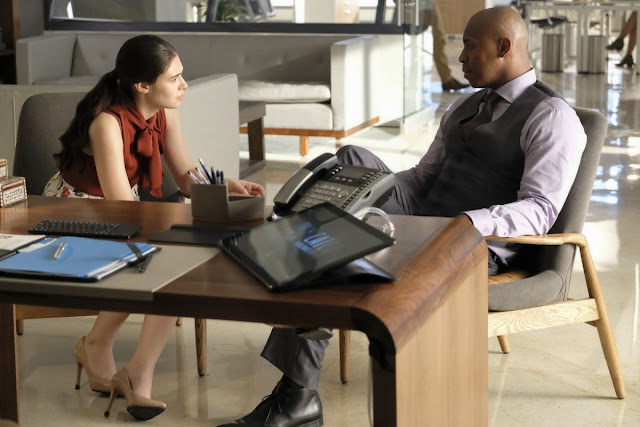 This episode of Supergirl starts thing off on a good note, there is a sequence which is perhaps the most Supergirl thing, grabbing a flagpole she puts it in the ground between two protesting groups about to start a riot. It is the kind of image that would be splashed across every newspaper on Earth 35 and in real life, an attractive, human-passing alien, holding up the American flag in an attempt to remind those forces about to violently clash to keep the peace.

That is an image that then sets up the rest of the episode, with Supergirl trying to be something of a unifyer, even as her country decends into cruel chaos now that the president has been unmasked as an alien, albeit a nice one. The political commentary is front and centre here, but the allegorys and metaphors are more prominant here than in the opening episode. What this episode also does quite nicely is give some much needed development for the relationship between Supergirl, Kara and Lena Luthor and a stronger sense of who James Olsen is outside of helping Kara and the gang, when he is left alone to run CatCo. And there is a great look at how interesting Brainy might become in the future of the show, one who is affected by the emotions of others around him. I also really liked the moment with Nia's first act of heroism stepping inbetween a brewing battle between Brainy and some bigots.

I was surprised by how well the episode handled Jame's stand on editorialism, which overall made for a much stronger episode and bringing in his activities as Guardian was a smart move and makes him look like a nicer person than one who is now just interested in running a company for profit. The setup for this little scene also gave Nia the opportunity to show why she is so adament on making this particular statement, linking her struggles as a trans-woman to elements to anti-alien-sentiment like harrasment, discrimination and violence in a way that rings true with the real world.

I have been wondering how Supergirl was going to reveal the fact that Nia is a transgendered woman. If the show made too much of it, it might have added to the 'stigma' and if they ignored it completely then it would be a let down for the trans-community at large. So I was impressed that this point was brought up in a conversation she was having with someone she trusts and in a progressive show like this, it was probably the best way to mention it.

I also appreciated that this episode made a point of having CatCo workers and DEO agents doing horrible things to the aliens working with them. It is easy to say that all the good characters are always respectful and that bad characters are always bigots. But people know that the reality is always more nuanced as that and that prejudice is always more insidious than anything we've seen so far on this show. The scene in question concerns someone swapping an alien's cup of coffee for a cup of woodchips. It might have had more of an impact had we known the name of the species and what they ate as it is hard to understand a slur when we don't know what the slur is supposed to be about.

Perhaps the weakest point of this episode surrounded Agent Liberty, the new villain for this season. While he has now been named, the golden mask is proving to be a problem. The actor playing him, Sam Witwer is absolutely fantastic in everything I've seen him in but the mask is getting in the way he is saying his lines.

Another strange moment was when J'onn commended Alex on how she was running the DEO. But did he see her interrogation of Otis Graves? I can't help feeling that Alex would be slightly ashamed of her actions there but hopefully there will be some evidence of that emotional struggle as the episodes go forward. If the idea is supposed to be she is radicalising to stop the Earth First movement then we need to see some more evidence of that and as her sister, friend and some co-workers are aliens it would make sense for her to do this. But I can't help but feel that the audience need to be let in on that fact and there needs to be some thought-processess seen for Director Danvers. I have no doubt that if J'onn or Winn still worked there they might have called her out on it.

This was also the perfect episode to see some of Brainy's cold and calculating side. While having a walking-talking machine might prove convient, it is impossible not to feel anything but warmth to Jess Rath's performance in the role and it is even harder when he is wearing one of Jeremy Jordan's jumpers! Seeing some genuine emotion on his face, shock and horror and later confusion, opens his character up to the audience in a new way. Lets hope that he begins to open up more to Alex and Nia in the future episodes...