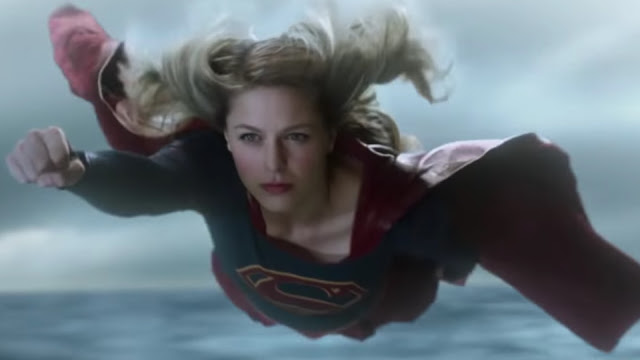 American Alien works as an excellent episode to open the show's Fourth Season and it is both solid in its own convictions and establishing an overall story arc. Lynda Carter returns once again to the role of American President as well as the villain Liberty, the country Kasnia and the soon-to-be-superhero, Nia.

The theme for this episode was firmly planted in presentation and perception, more importantly on how we and others see one-another. Kara gets a lesson in letting privalidge obscure what is right in front of you, while J'onn makes his mark, working with a support group for aliens who feel threatened by a growing anti-alien hysteria. Lena manipulates her mother into helping her save James from prison and President Marsdin finds herself in the ultimate failure of her own perception.

Hopefully if this episode is anything to go by, Season Four will be taking a lighter touch to its political touches, even though there are still some real world touches here and there, most notably the alien's plight of getting themselves realised as citizens, something that mirrors what is happening in countries around the world now. But already it feels handled a lot better than it was last year when it all got a little tired.

The episode also used a more story-based allegory approach to showcase the aliens outside of Kara's world in a way that will prove interesting to see develop in future episodes. It all picks up with the conclusion of last year with J'onn leaving the DEO to help out fellow aliens in need. And having Kara on the other end of the argument is an interesting move too and it is nice to hope that we will get more of this storyline which will combine political commentary and world building in a way that creates a more choesive overall story.

Lena lying to James injected their realtionship with some much needed tension as well as a way of giving her an intractable problem with Supergirl. Lena's stance has always been that Supergirl's hiding of her identity makes her untrustworthy and condesending but when James finds out what Lena has now done, he might make the same argument against Lena as Lena does against Supergirl. It certainly would be a benefit for the coming conflict, not letting Supergirl off the hook for her actions, while also holding Lena accountable for her own.

The episode also gives us another thread I hope is picked up on at some point, in the form of the image inducers made by Lena's company to hide the alien's true faces. She is making some good money from it and while she claims it isn't political, we can't trust what she said to her mother about it when she was manipulating her at the time. And although Lilian Luthor is no one's favourite, I am interested to see how trading her relationship with her mother to save James will affect Lena as the season goes on. And now with the promise of arrest is James ever takes up the Guardian mantle, it might give the show some time to heal that wound between Kara and James.

The weakest moment of the episode was in the way it handled Brainy's inability to follow DEO rules. Brainy's conclusion that Alex's attitude had been because she missed Winn wasn't warrented judging by what we saw in the episode. Showing us how everyone is dealing with Winn's departure was important and it was nice to see this being Alex's problem, taking the weight off of Supergirl for a change. But there will have to be some changes to the plot if Brainy is supposed to be Alex's right hand as the pair just didn't gel well together. One can't help feeling this might have been a big mistake on the producer's part.

Overall, this packed premier episode left us with some huge questions. Who is Liberty and what did he want with the alien Empath barmaid? Who is Supergirl's doppleganger in Kasnia and what is the deal with those who are guarding her? All of these are exciting questions and hopefully the season will come up with some interesting ways to answer them...