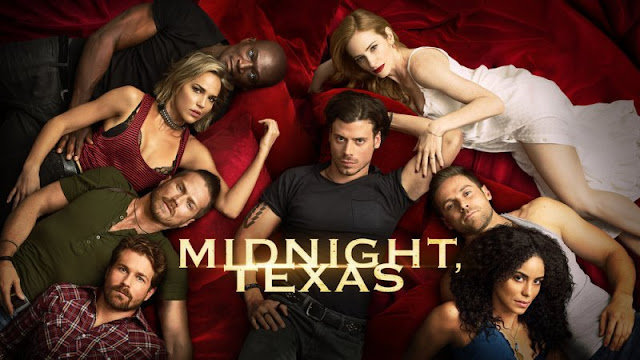 If I'm speaking honsestly, as much as I thoroughly enjoyed the debut season, I didn't think Midnight, Texas would get a second one. And I think I would have been fine with that, I'd have just gone back every few years and binged on the DVD release. As good as the show was, there were some glaring inconsistancies in the quality of the episodes and for some reason, it never reached its fullest potential. But in any case, we were granted a second season with a new creative staff to boot.

But I still don't really know what to think about this second season as the opening episode, Head  Games was good fun but it wasn't anything truely fantastic. There were however, some of the weaker aspects of the seasons, like Creek and storylines dangling were wrapped up and the board was cleared for some new characters to take centre stage.

Nothing in this episode was bad and the episode moved through everything it needed to, quickly and effeciantly but it also didn't give me anything really exciting to look forward too. Kai, the new healer and preacher in town was interesting but I am worried that his storyline might get a little muddy as he can obviously work miracles and it has been implied that he has had a lot of interesting run-ins with other magical beings. But he also hids a shrunken demonic head that he speaks too so there are a lot of things to deal with when it comes to his character.

Perhaps the most interesting new character here is Kai's wife, Patience, mainly because I've always been interested in normal people living with magical people. Their stories are always more interesting, especially if those stories delve into ones of self-worth and jealously. We didn't get enough of her in this episode though and that is it a bit of shame. Hopefully she'll feature more prominately in later episodes.

For the majority of the episode though, the team dealt with the consequences of Manny's demonic cancer. I had a incling that Zelda wasn't the old Zelda from the moment she was in the trailer. I had also hoped that this might be a long-running problem for Manny but it seemed that it was wrapped up far too quickly.

There was one lasting consequence for the gang though and that was Creek's departure, she is moving to Texas proper to become a writer. This wasn't a big surprise to anyone who keeping an eye on the casting news but it also brings me to my next problem, I couldn't remember what half the character's were called. It took me a while to remember Creek's name and I couldn't remember Fiji's name, even though she was my favourite character from the last season. I know it has been a while since the last season, but I should have remembered the names for these brilliant characters, even if I was still impressed by Francois Arnaud, who continues to look pretty and does some great acting!