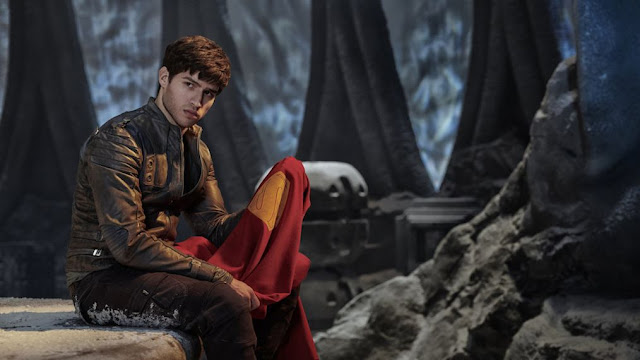 As I've been a lifelong fan of Superman and Batman and the comic book industry in general and how they mirror their live action counterparts. While Batman dominates the movie universe, Superman has conquered the television universe.

Even though it has been years since The Adventures of Superman graced our airwaves, but the Kryptonians have dominated our screens from the late 1980s with Superboy, Lois and Clark, Smallville and Supergirl all following each other in rapid succession. Nowadays though, there is some overlap with Metropolis coming out soon with Krypton not having been out long. Will that work? Well, we'll have to see.

If Krypton has to be complemented on anything it is that they haven't writen themselves into a corner by setting the series about two-hundred years before the planet's destruction. It then leaves any urgency about sending Kal-El off in a rocket and to their credit, this gives them some wiggle room in the way of their storytelling, allowing them to tell the stories they want.

If the writers had to, they could loosly place Krypton in the DC Extended Universe, for Krypton shares some similarities with the Man of Steel and the symbol of House of El really bares a resemblance to that featured in the movie. Plus one of the creative hands from the movie is on hand to aid in this series.

Much like the elders seen on screen, Krypton's high council are just as stubborn, even two year prior to the planet's big boom, so then it is odd that it their favourite pastime in ignoring warnings about their planet about to be destroyed, even if it means silencing the planet's most brilliant minds.

After the opening prologue, the pilot episode leaps forward joining Seg-El, played by the very handsome, Cameron Cuffe, who just so happens to be Superman's granddad. Well, he will be one day if he can keep the future on track.

In a move that feels like its taken from The Terminator, Superman's existence is threatened. But if Seg doesn't stop the coming trouble, then there won't be a man of tomorrow. But aided by Adam Strange, played by Shaun Sipos, there might be some hope.

The main threat comes from Brianiac, played by Blake Ritson, is a collector of worlds whose aim is to live up to his namesake. It is clear from the off that he too has travelled back in time but the storyline would only make sense if he had, how else would his actions affect the future otherwise. How else would his actions affect the future otherwise? If you look at it logically, the only proper for Brainiac to save himself is to go back and pull a SkyNet, remove the problem before it becomes one. Remove Superman's grandfather and then Superman will never have existed.

What little we see of Brainiac, both in the ship and when he is fully realised, is pleasing enough though as he boasts his iconic appearence that I've wanted to see in live action for some time. As enjoyable as James Masters' performance was in the role during Smallville, he kept a human appearence. But in Krypton, we have a fully formed Brainiac, one that looks like the Gary Frank run of comics. It's superb.

Krypton feels more like a science-fiction series than it does a superhero show and that is most certainly the case. As a result it feels like a show that would appeal to many different viewerships, something that the creators were probably hoping for. It worked before, Smallville did the same thing. Nevertheless, comic book fans will still feel at home and Krypton will appeal to people of varying preferences.

At the same time though there are a few things that aren't done differently from other shows, the producers almost get drowned in mentions of guilds and houses and while that works in the confines of the story, you will tire of it quite quickly. If you were play a drinking game, from every time you heard, 'guilds', 'houses', 'ranks' and 'rankless', you'd be dead by the end of the first episode!

In fact, to get the most out of this series you need to be a fan of series' with political and military intrigue, as much as you are fan of Seg's journey. While they prove to be more intertwinned than at first sight, the latter is certainly more interesting than the former. As much as I liked the character of Lyta-Zod, she felt shoehorned into scenes to give them some form of military bearing. Thankfully, things calm down as the series progresses and eventually, focus shifts back to Seg and his story.

Having said all of that, Krypton is certainly a show that comic book fans and general viewers need to treat themselves to. And while I doubt it will ever reach the highs of the CW series', Krypton's opening season is a truimph...