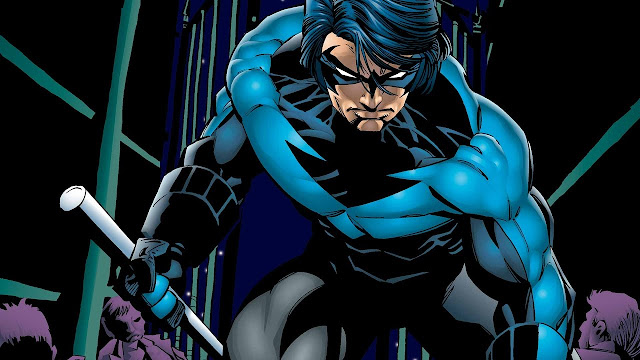 Nightwing has always been a fan favourite, but the problem with comic book industries is that they produce a certain amount of copies of graphic novels, once they run out, they reach stupid prices on Amazon or Ebay. What a blessing it was then that DC Comics decided to reprint all of the Nightwing run, pre New 52. Nightwing has always been one of my favourite superheroes so this book was a real treat for me. And Volume One: Bludhaven is two graphic novels in one as it reprints the solo-mini series from Dennis O'Neil and published in 1995 and the first eight issues from solo ongoing series from Chuck Dixon, first published in 1996.

The story concerns the Dick Grayson we all know and love going out on his own, putting aside his Robin persona and stepping out of the shadows properly as Nightwing. That is something that the mini-series addresses brilliantly and it is nice to see Dick becoming Nightwing properly.

Dennis O'Neil is a tremendous author too, his dialogue pops off the page and it makes each issue an incredibly easy read. You can tell he had a firm understand on who Dick was as a real person. The story we get taken on is immense as Dick is faced with the truth behind his parents deaths and the real man who might have been behind it.

Dick travels to a foreign country to find out about his parent's past and gets himself involved in a power struggle between corupt jailed ex-politician and the even more corrupt current leader. Needless to say, the situation gets gradually worse and there are some heart-breaking choices that need to be made. But I really liked reading this mini-series, the story really gave us a good look at Dick's character, his past and his parents.

Following on from the mini-series are the first eight issues of his long-running, ongoing series. Chuck Dixon's run on the title is legendary running for over 100 issues. Nightwing finds himself alone in Bludhaven trying to solve a mystery that has ties to Gotham but he manages to show Nightwing working on his own, using his skills honed as Robin to solve the mystery.

The first problem Dick runs into is that he doesn't really exist. Having lived off Bruce Wayne's money for so long, he hasn't got a job, birth certificate, no proof of employment. Getting such a thing as a phone line is going to cost him a stupid amount of money. He manages to find a cheap appartment and gets a job at a police bar where he hears the crimes they are trying to solve, giving him a reason to suit up and help.

We also get to see Dick mentoring the new Robin Tim Drake and how inexperienced Drake really is. Many panels show off, not only Dick's impressive buttocks but him in different positions as he swings across the city, showing off his incredible athletic skills. The end of the book sees Dick meeting up with Batman who tells him he is doing a good job, praise indeed from Wayne.

Overall in Bludhaven, Nightwing investigates his parents murder, killings in Gotham and stops a mob war. The end of the book promises more mystery and intrigue to come in future volumes that I will be picking up. This was a cracking read, reinforcing why Nightwing is one of my favourite superheroes...