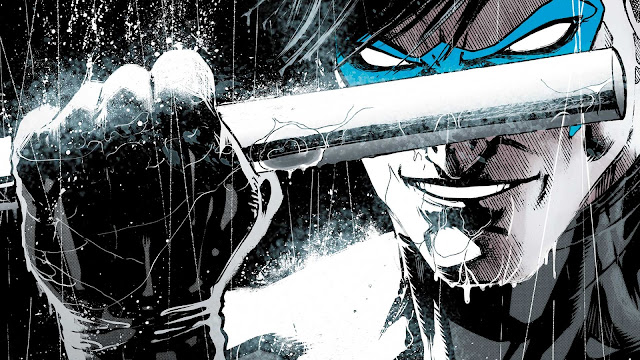 Nightwing Volume One: Better than Batman is the first collected edition of Nightwing's DC Rebirth series, written by Tim Seeley and art from Javier Fernandez. It sees Dick Grayson leaving his days as a spy for Spyral behind and taking up the mantel as Nightwing once again. But before he can fully take up the mantel again, he has to deal with the Parliment of Owls and his new frenemie, Raptor.

I'm a massive fan of Dick Grayson and Nightwing. I've enjoyed reading into his history, going from Bruce Wayne's ward to Robin to Nightwing to an agent of Spyral to Nightwing again. And Better than Batman is a great new start for a brand new era. If you are like me and looking for somewhere to really get into Nightwing again, then this opening volume is the perfect place to start.

While the opening issues of the series would probably be better enjoyed if you have some prior knowledge concerning the Court of Owls in the New 52 volumes of Batman and Nightwing, you can still follow this story easily enough, even if you are left a little confused by the end of it. The Owls have planted a bomb inside Damien Wayne but unknown to them, Dick has managed to get it out and now he can take them down from the inside. The plot does verge on being a little unbelievable at times but not too much. Just remember that this is a comic book!

If there is anything particularly farfetched about this story it is how easily the Owls allow Dick to enter their ranks. Also Bruce Wayne is surprisingly calm about the bomb being there at all!

On the plus side though, Seeley packs each page full of character development and charm and doesn't waste any time in getting you invested in Nightwing again. Seeley also introduces a new character, Raptor, who has some mysterious ties to Dick's past. The reception of his character has been a little hit and miss with some readers but overall, I enjoyed his addition to the Nighwing mythos. While he isn't all that different from Nightwing, their biggest difference comes in how they deal with justice.

They are both tasked with the same mission from the Owls while they both try to take them down from the inside. While the Owl story seems to go on forever, you need to remember that when they were first introduced, they were a rich, hidden sect in Gotham city. Now they are the last remnants, trying to cling on for life. Luckily, while their story goes on forever, they aren't in much of this book as Seeley wisely chooses to focus on Raptor. But if the Owl storyline bored you, then this book might not be for you.

Luckily though, you do get what you would expect from a Nightwing book as the characterisations are spot on. Nightwing is both light-hearted but serious, he has an excellent sense of right and wrong and is still as skilled a fighter as he ever was. When he messes up a couple of times, he is the first to apologise and it doesn't sway him off his course. Nightwing is a more human version of Batman and with a title of Better than Batman, one might expect some ego but Seeley doesn't write Dick in that way.

Fans of Batgirl will also be pleased that she shows up half-way through the book. I've always enjoyed the human side of the Batgirl books and having Nightwing and Batgirl together proves a welcome change in a Court of Owls heavy storyline.

On the whole, the experience with Better than Batman is an excellent one. But for me, the art is a little odd. I felt it wasn't quite as strong as the art we are getting in other titles, especially that from David Finch in the Batman series. There are times when faces look wrong, out of proportion and Dick Grayson looks a lot older than he should do. Damian Wayne looks like a troll and facial experesions where restricted with only a few showing.

That's not to say the art is terrible, there are some good moments and it keeps you interested in the story. Nightwing's suit is really cool and Batman, Batgirl and Damian are represented well at places. Raptor comes off as the best drawn character in this book though, with his costume and guantlets looking particularly good.

Better than Batman is a nice opening to another successful Nightwing run. There are some great character developments, some nice plotting and some appearences from other members of the Bat-Family to keep Batfans happy. Although I found the artwork lacking it doesn't distract from the hard work Seeley has put in.

While I enjoyed this book overall, I am looking forward to starting Volume Two which sees Dick return to Bludhaven and move away from the dull Owl's storyline...