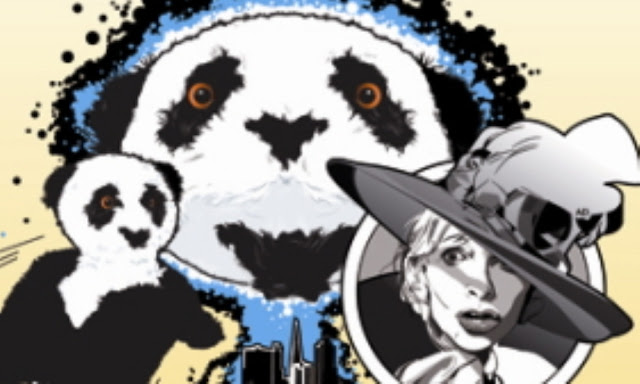 It's Panda birthday, so as a present, Iris decides to take him to San-Francisco on New Year's Eve in 1999. It's all well and good until Panda's nagging causes Iris to spill her G&T into the Time Vortex at the heart of the bus. And no one is supposed to do that.

A mysterious rift begins to form over the bus which is now stuck on top of the Golden-Gate Bridge and an unconscious Iris is rushed to hospital, where the hunky Dr. George Strangeways is puzzled over her X-Ray results. It shows her two livers! Meanwhile poor Panda is stuck on the bus with his evil doppelganger from another universe, Lionel Pandeau. Lionel wants to learn the secrets of the rift and will stop at nothing to get it. Let the invasion of the Panda's begin.

Penned this time by Mark Margs, the brother of Iris's creator, Paul Margs, The Panda Invasion brings the second series to a close expertly blending different era's the parent show's history together. This time as you might have expected, this story takes after the 1996 Doctor Who TV Movie and Mark Margs has no shortage of things to make fun of there.

Though it doesn't quite reach the levels of insanity The Two Irises did, The Panda Invasion is certainly fine for a bloody-good laugh. There are only two main guest characters in this piece two. Big Finish legend, Sean Carlson is George Strangeways, a man who still lives with his mother. Being caught between Iris's advances and the strange events around him, he is forced to re-evaluate his world view. As a result, George spends much of this story in a state of serious confusion and dishing out some cutting sarcasm.

Toby Longworth gets to bring out his hilarious French accent as Lionel Pandeau and he does so with obvious glee. The stylish Pandeau's distain for his common cousin Panda is palpable. He and David Benson spark off each other too, making most of their scenes comedy gold.

Katy Manning is delightfully bonkers as Iris, but then would we ever have her any other way?! It takes a special kind of actress to deliver some of the lines Iris throws out with complete conviction but Manning is just that actress, thankfully for us listeners.

For anyone who is that way inclined, this story is the perfect example of a drinking game. The script is deliciously littered with sci-fi references so it is time to break out the Bombay Sapphire and have a blast!